I started off researching packaging for chocolate, and really did not get very far. This led me to wonder about other forms of food packaging, and I did not get far there either! So I decided to apply my past experimental archaeology experience and some common sense, and decided, at least for now, that there really are not many choices.
Paper bags were not a commercial product until the late 18th century to 19th century, though in 1743, John Bartram with a supply of paper from London, did make his own paper bags, both large and small to hold seeds (New Green World, Josephine Herbst, page 71). Of course at this time paper was made from flax, not from wood as it is today, and later they made paper from old linen rags. So I guess there is a precedent for using paper. 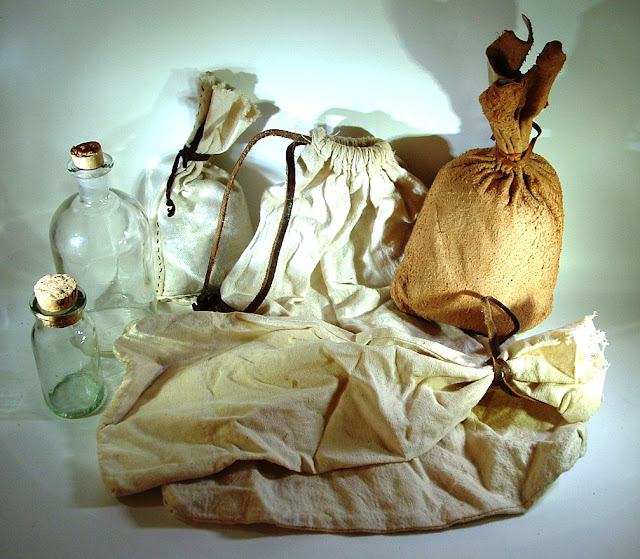 Leather and cloth food bags plus a couple of glass bottles. Pottery was also used, but it tends to be too heavy for packing on foot. Glass although fragile, can be wrapped in cloth or covered in leather.
Then there are linen bags and leather pouches, both of which have been used in a variety of sizes for centuries for carrying and storing foods. We also know that items intended originally for one use, were often used for for others once empty. such as bottles. Wine and spirit bottles could be used for carrying water or even cooking oil (Encyclopedia Of The American Revolution).
One chap found that a powder horn he had found did not contain gunpowder...

"Found my powder horn was filled with spirits and got drunk as a wheel barrow.”
Constant Belcher of Elizabethtown 1776.
http://greensleeves.typepad.com/berkshires/ogden_genealogy/ 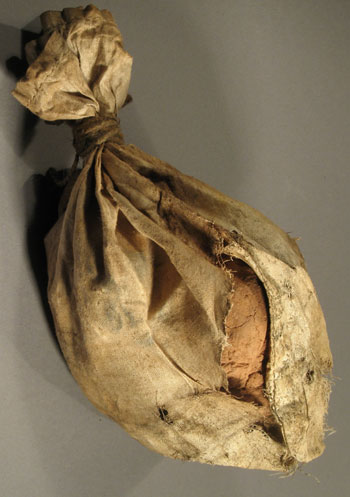 This cloth sack was used for provisions in a 1910 expedition and contains cocoa powder. Now I realise that 1910 is 200 years too late for us, but I figure if it was still in use two hundred years later, then it was probably a favoured method for carrying food provisions in the earlier period. Flour was carried in cloth sacks, so why not cocoa powder.
Spices could be carried in a small or large bottle, or they could have been contained in some folded paper, as in perhaps an envelope. This in turn could be secured in a cloth bag. 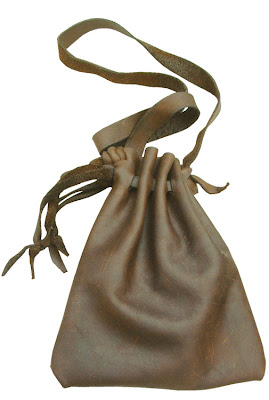 This I would have taken for a replica, but the tag sais it is medieval period and it is in the museum of London.

These three images of drawstring pouches are from Diderot's 18th century encyclopedia.

Don't overlook natural materials that were available locally. Corn husks and burdock leaves were used as packaging, and grapevine was used when there was no twine.