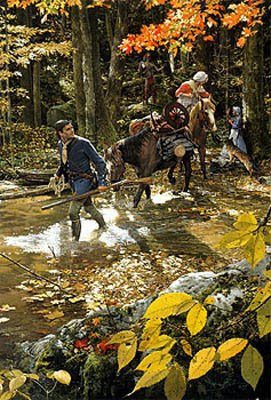 Friendship...A Common Ground by John Buxton
In this painting, John Buxton brings to light a gentler side of the rough eighteenth century frontier. Here we see young Mary Means bidding farewell to her friend, Maiden Foot. The following is an excerpt edited from the historical text by Gerorge Irvin which accompanies the print.
"The story of Maiden Foot is among the most touching to come out of the American frontier experience, set against the turmoil and bloodshed of Pontiac's war. A young Delaware warrior known as Maiden Foot took a liking to Mary Means, the eleven- year- old daughter of Mr. and Mrs. Means who lived in the Fort Ligonier Valley in the late 1750s. Mary reminded Maiden Foot of the sister he had recently lost of approximately the same age. Upon one of their encounters at Fort Ligonier, Maiden Foot gave Mary a small string of beads.
Time passed and in 1763, the frontier again erupted in bloody warfare as Pontiac's war struck the Ligonier valley. Upon receiving word of the approaching war parties, Mrs. Means packed up the young Mary and rushed for the safety of Fort Ligonier only to be caught in route. They were tied to saplings and later a warrior appeared sent to kill and scalp the unfortunate Means. The warrior in question was Maiden Foot.
He quickly recognized the family and set them free. Maiden Foot escorted them to their home where they met Mr. Means, then led them to a secluded place in the mountains until the end of the hostilities. As the family parted with Maiden Foot, young Mary gave him her handkerchief upon which she had embroidered her name, Mary Means, believing they would never meet again.
Mary grew to a young woman and married an army officer named Kearney, eventually living near present day Cincinnati. After the close of the Battle of Fallen Timbers in 1796 where Mary's husband fought, Kearney found an old Indian sitting on a log. The weary Indian stated he had fought his last battle then drew from his pouch a small tattered handkerchief with the name of a friend embroidered on it. Kearney, who had heard the story of Maiden Foot many times from Mary immediately recognized the old man as the long lost friend of his wife and mercifully escorted him to their home. Maiden Foot was to remain there until his death four years later, among friends and the little girl he had seen so many years before."
Posted by Keith at 16:22 No comments:

Has resumed fires and wearing an under waistcoat. ...... Transcription of a letter from the King of Prussia to the Marquis d'Argens.

WaistcoatsThere is some evidence for knitted men's undershirts (called waistcoats, but worn underneath the linen shirt) in the 17th and 18th centuries. The most famous example is the silk undershirt worn by Charles I to his execution in 1649.
Fashion in Detail by Avril Hart and Susan North, p. 184-5).

Woolen waistcoats were worn over the stays or corset and under the gown for warmth, as were petticoats quilted with wool batting, especially in the cold climates of Northern Europe and America. Fashion in the period 1750-1795. From Wikipedia, the free encyclopedia.

Camisoles or undervests are mentioned even less frequently, and it is not certain that they were always worn as undergarments. We have seen above that it was customary to wear a shirt directly against the skin, and it is known that the term "camisole" also can refer to a type of waistcoat (gilet). When made of flannel, as is the case with two camisoles in Duquesnel's inventory, [54] they were worn under a shirt. Besides two other camisoles, made of dimity (basin) listed in the same inventory, we do not know what other fabrics were used for camisoles.
Waistcoat: 1. Short sleeveless garment worn under a vest, jaquette ... etc. A sort of camisole of wool or cotton, which was worn next to the skin or over a shirt. The gilet is a vest without basques, and originally without pockets. (Larousse, XX siècle, "gilet").
CIVIL COSTUME AT LOUISBOURG: 1713 – 1758 MEN'S COSTUME BY MONIQUE LA GRENADE March 1972 (Fortress of Louisbourg Report H-F16AE) Translated By Christopher Moore (82)
Dispite the above quotes, I can find no evidence to date of a specific garment made to be worn under the normal shirt. The term undershirt seems to have come from the earlier period when jacket sleeves were slashed to show the shirt underneath.
A normal shirt, or waistcoat can be worn under another shirt, or two waistcoats can be worn together, one under the other. Older, worn shirts and waistcoats may have been used specifically for wearing under another shirt or another waistcoat where they would add extra warmth, but not be seen, as in the Arnish Moor and Barrock burial clothing.
Posted by Keith at 20:20 No comments:

I am looking for a 17thc.-18thc. woollen knitted men’s work frock. It appears that the Guernsey/Gansey/Worsted frock was not produced before the 19th century, but I did find the following information. Can anyone tell me where on the net I can find more information on this garment? Illustrations? Patterns?
“The fisherman sweater has its origins in Brittany. Surprisingly it was not the fishermen that started to wear them, but merchants who during the 18th century travelled to England to sell onions, these merchants wore an item of knitted wool clothing that made them recognizable from a distance, the garments were made with very tight stitching, using a stitch designed for warmth, water proofing, and considerable resistance to the wind”.
“The fisherman sweater first worn by fishermen was a long garment, tightly fitted, designed to protect a sailor's back and keep the body warm. Highly practical, it had buttons on the side to aid quick wearing and removal, and was made from unwashed sheep wool, which still contained the sheep's natural oil, the very same oil that had protected the sheep from the elements; this oil is removed from modern wool, as it can smell a bit”.
http://www.yourgoldweb.com/malls-shopping/article6222.htm
Posted by Keith at 20:17 No comments: 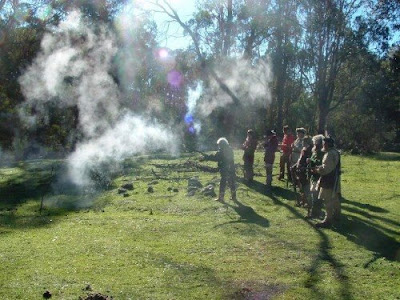