Priming Horn Information.
“The priming-horn is intended to be filled with Pistol Powder, and the Ranger always to prime from it in time of action, by which method he will not be near so subject to burn priming or miss fire as He would by priming from a Cartridge, as the grain of the powder will be small and a very great fault which Men are subject to in time of action will be prevented, Vizt. That of spilling one half of their Cartridge of powder and sometimes more in priming and shutting their Pans, and when they have loaded and discharg’d their Pieces after the common method, it often happens that the Ball is not sent with half the force it is intended or anything near the distance it ought to go, which mistake will (I imagine) be avoided by the handiness of the Priming-horn, as the Men will have nothing more to do with the Cartridge than bite off the top, put it in the barrel at once and ram it down, and if the Cartridge is fill’d with Cannon powder it will have just the same effect I conceive as if fill’d with Pistol powder which will get into the touch-hole and catch fire as quick as can be wished…..” 21

End Note 21 from page 366: HL, LO6927, 13 Feb. 1758 Captain/Major George Scott, ranger captain:
Small Arms of the British Forces in America, 1664-1815, by Dr. De Witt Bailey.
My thanks to Gus for this information.
Keith.
This information copied from: http://minuteman.boards.net/thread/427/finally-priming-horns-fiw-documentation?page=1&scrollTo=3360 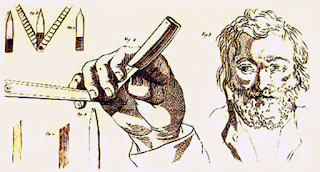 A question was raised about what soap was used for shaving in the 18th century, so I thought I would do a little research. No doubt many of you carry a piece of soap in your pack as I do, so soap is an interesting subject even if you do not shave. 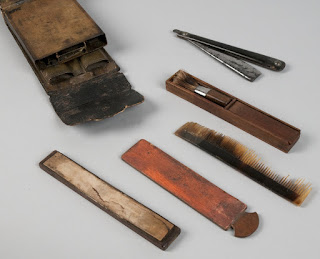 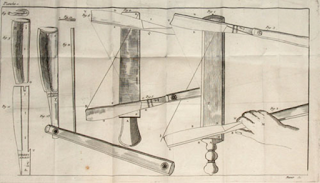 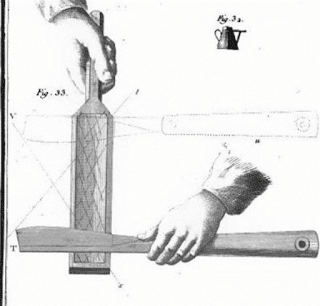 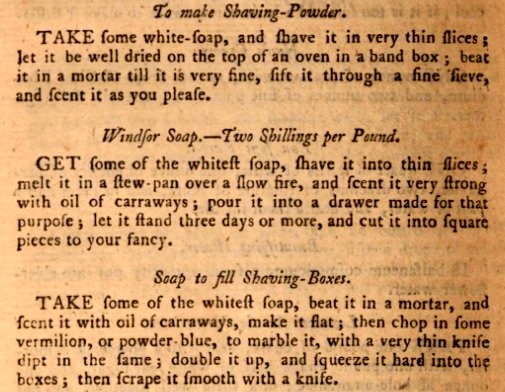 The Art of Cookery Made Plain and Easy: Which Far Exceeds Any Thing of the kind yet published by Hannah Glasse 1747


It seems that soap came in large bars, sometimes a person could choose the length of the bar they wished to purchase, & this bar was then cut to size. Other methods saw these bars cut into bricks for sale. I do not get the impression that we are talking about the bars of soap we purchase these days, I think these bricks were square & much larger. This type of soap was known as hard soap, soft soap was apparently the sort of soap that was made at home by the settlers. Whether or not there was a preference in hard or soft soap for shaving I can’t say, but it was this ordinary soap that was used for washing & shaving.

Cutting bars of soap by Diderot

Soap.
Ordinary soap was used for shaving in the 18th century.
Spain during the 11th and 12th centuries, where Spanish Muslims made Castile soap.
http://www.todayifoundout.com/index.php/2013/03/the-history-of-soap/
Castile soap for shaving, washing & weight loss.
https://www.worldturndupsidedown.com/2017/01/18th-century-castile-soap-for-shaving.html
In 1752 Richard Barnard of Temple Bar claimed to be the inventor of the ‘True original shaving powder’. A rival powder, advertised the same year by J. Emon, claimed to ‘make razors cut easy and [was] very good for tender faces’.
https://dralun.wordpress.com/2016/05/17/splash-it-all-over-a-brief-history-of-aftershave/
“To make very good washing balls take storax of both kings, benjamin, calamus aromaticus, labdanum of each a like; and bray them to powder with cloves and orris; then beat all with a sufficient quantity of soap till it be stiff, them with your hand you shall work it like paste, and make round balls thereof.”
Gervaise Markham, The English Housewife 1683.
“TO BE SOLD BY EDWARD LANGDON, IN FLEET STREET, NEAR THE OLD NORTH MEETING HOUSE, A QUANTITY OF HARD SOAP BY THE BOX, SOFT SOAP BY THE BARREL”.
Pearlash soap add, Boston Gazette Mid 18th century.
https://spadet.com/19th-century-soap-making-its-history-and-techniques/ 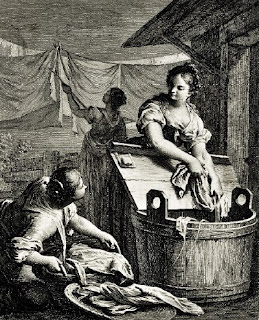 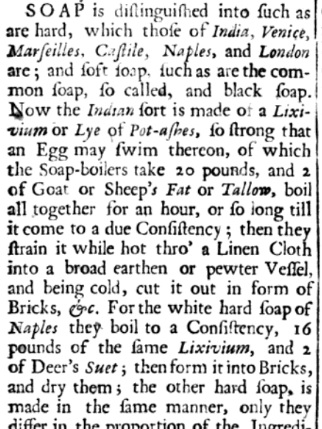 In all the material I have researched so far, no where does it mention the size of bar soap, nor are there any images of sketches of 18th century soap. However, I did find a painting, & it does give a fair indication of the size of a brick of soap. 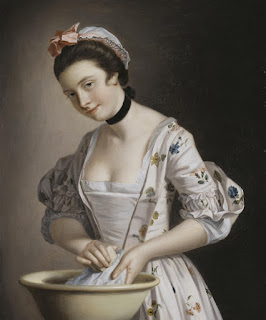 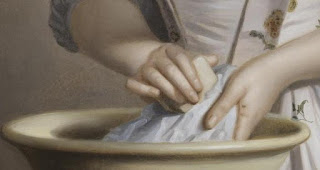 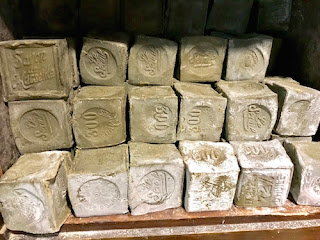 This is an image of Marseille soap as it is sold today, I have no proof, but I suspect that this could have been what it looked like in the 18th century. 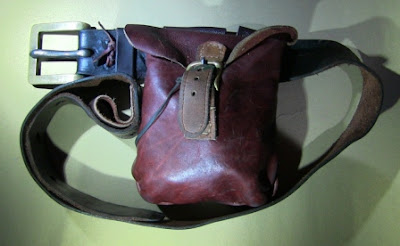 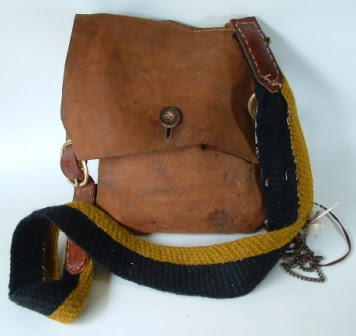 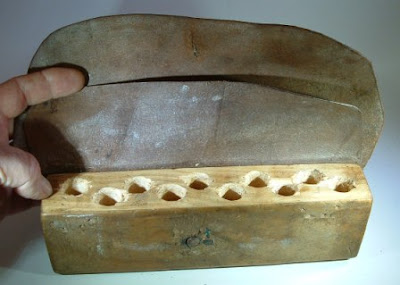 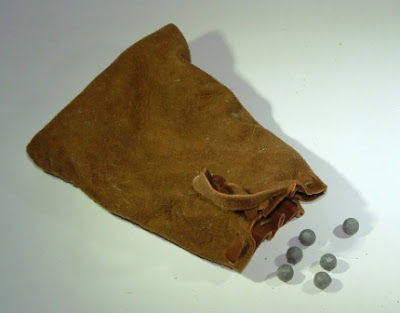 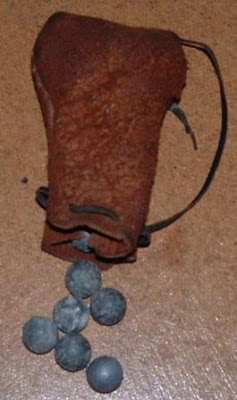 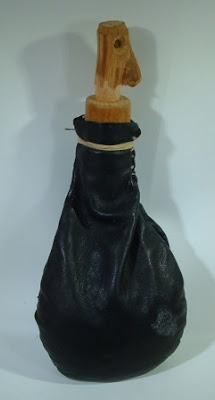 For those of you who may be confused with the different names used to describe a pouch or bag, the simple fact is that in the 18th century they used these terms interchangeably, just as we do now, so you could have a shot pouch, or a shot bag, or even a ball bag or a ball pouch & they may or may not be all the same thing! 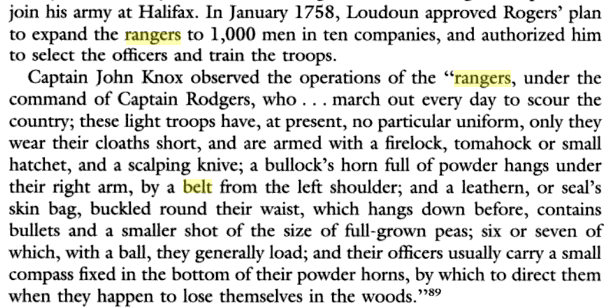 https://books.google.com.au/books?id=7Mum6vMM5YwC&pg=PA150&lpg=PA150&dq=Roger%27s+Rangers+%22leathern+or+seal+skin%22+belt+pouch.&source=bl&ots=QwOquz3zml&sig=ACfU3U3Tw3qJe-vGNGJRCcmbaA9N5QGDRg&hl=en&sa=X&ved=2ahUKEwiXs9_9_JfnAhVUbn0KHU3NDBwQ6AEwAHoECAoQAQ#v=onepage&q=Roger's%20Rangers%20%22leathern%20or%20seal%20skin%22%20belt%20pouch.&f=false
SHOT [fcfcot, Du.] the going out or reach of a Bow, Gun, Jjr. as far as it can carry ; all Sorts of Bullets for Fire t Arms.
CARTOOSE  [ Cartouche, F. ] CARTOUCH , CARTRIDGE ] A charge of powder put into a Paper Cafe, exactly fitted to the Muzzel of the Gun, O"c.
BAG [Bcljje, Sa\. En>^a, L.] a Sack oc Pouch.
POUCH [Pocca, Sax. Pochette, ?.] Bag or Purie.
BELT [Belt, S**.] a Girt to hang i Sword by : A Ho a Difcafc in Sheep.
BOX [Boxe, SaK.} a wooden Cheft or )ffcr. BOX [of Bofejieop, Sax.] the Wood of the Box-tree.
CASE  a little Box, or Covering to put any thing in.
\ BALL fjl&al, Beln."] any round thing.
18th century dictionary.
https://ia802700.us.archive.org/14/items/universaletymolo00bailuoft/universaletymolo00bailuoft_djvu.txt

BAGS AND PURSES IN 16TH CENTURY GERMANY
Tasche or Beutel are the German words for bag or purse, and when looking at artwork from 16th c Germany there are lots of purses to be seen on men, women and children. Small ones, big ones, hanging low from belts, others securely fastened to the belt.
http://www.curiousfrau.com/2009/04/02/bags-and-purses-in-16th-century-germany/
BAG  a Sack or Pouch.
POUCH  Bag or Purse.
BELT [Belt, S**.] a Girt to hang a Sword by : Also a Difeafe in Sheep.
18th Century Dictionary.
https://ia802700.us.archive.org/14/items/universaletymolo00bailuoft/universaletymolo00bailuoft.pdf 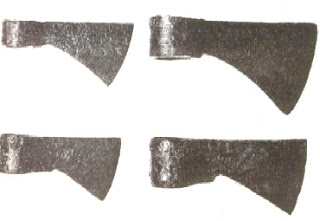 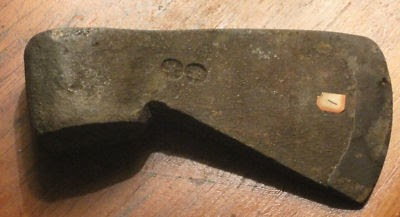