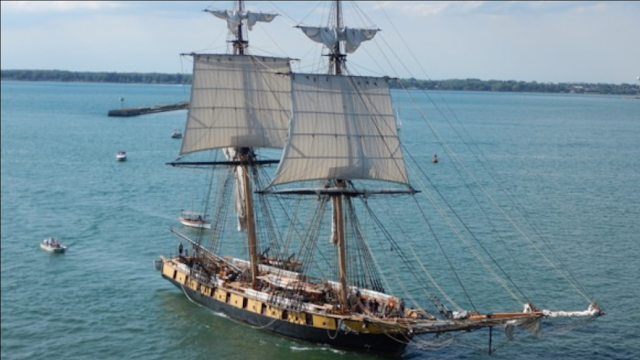 My sincere thanks to Grizz for sharing this recipe with me. 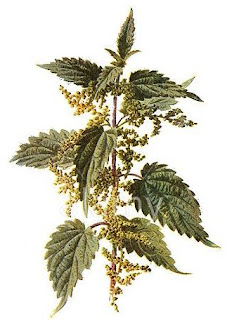 Ancient Nettle Pudding
Recipe courtesy of Ancient Craft and Celtnet Recipes
According to Celtnet Recipes, “when most food was boiled in a large pot, adding dumplings or ‘puddings’ to stocks (was) a good way of putting starch in the diet. These large dumplings are flavoured with wild herbs and nettles.”[9]
Ingredients
1 bunch of sorrel
1 bunch of watercress
1 bunch of dandelion leaves
2 bunches of young nettle leaves
Some chives
1 cup of barley flour
1 teaspoon of salt
Instructions
Chop the herbs finely and mix in the barley flour and salt.
Add enough water to bind it together and place in the center of a linen or muslin cloth.
Tie the cloth securely and add to a pot of simmering venison or wild boar (a pork joint will do just as well). Make sure the string is long enough to pull the pudding from the pot.
Cook the pudding until the meat is done (at least two hours).
Leave the pudding to cool slightly, remove the muslin, then cut the pudding into thick slices with a knife.
Serve the pudding with chunks of barley bread.
*The pudding can be served along side the meat with which it was cooked, or it can be served as its own stand-alone dish.
[1] Pappas, S. (2012, September 28). Ancient Burial Shroud Made of Surprising Material, Scientists Find. Retrieved January 2, 2015.
[2] Ibid.
[3] Vance, K. (n.d.). History of Stinging Nettle. Retrieved January 2, 2015.
[4] Nettles – discover its healing, medicinal qualities. (n.d.). Retrieved January 2, 2015, from http://www.nettlesforhealth.com/#!nettle-uses/c18ah
[5] Vance, K.
[6] What Else The Romans Did For Us. (n.d.). Retrieved January 2, 2015.
http://therapy.epnet.com/nat/GetContent.asp?chunkiid=21815
[7] Vance. K.
[8] Macrae, F. (n.d.). Traditional English cooking: Nettle pudding and other ancient recipes. Retrieved January 2, 2015.
[9] Boiled Nettle Pudding a classic reconstructed Ancient Recipe. (n.d.). Retrieved January 7, 2015, from http://www.celtnet.org.uk/recipes/ancient/fetch-recipe.php?rid=ancient-boiled-nettle-pudding 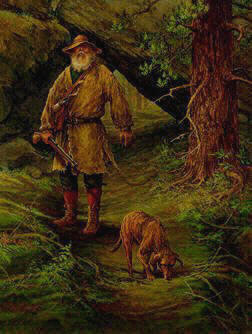 "We breakfasted at a Captain’s whither we had been directed; for along this road, and others like it in America, one must not be deceived by the bare name of taverns. The people keep taverns if they have anything over and above what they need, if not, the traveler must look about for himself. The Captain was not at all pleased that the neighborhood was beginning to be so thickly settled. ‘It spoils the hunting,’ he said, ‘makes quarrels; and then they come and want to collect taxes; it is time some of us were leaving and going deeper into the country.’ Hence we supposed we should find a thickly settled region, but had to go not less than seven miles before we came to the next neighbor. Like most of the inhabitants of these frontier, he was of those whose chief occupation is hunting, who from a preference for doing nothing, and an old indifference to many conveniences, neglect and dread the quieter and more certain pursuits of agriculture.

"These hunters or ‘backwoodsmen’ live very like the Indians and acquire similar ways of thinking. They shun everything which appears to demand of them law and order, dread anything which breathes constraint. They hate the name of a Justice, and yet they are not transgressors. Their object is merely wild, although natural freedom, and hunting is what pleases them. An insignificant cabin of unhewn logs ; corn and a little wheat, a few cows and pigs, this is all their riches but they need no more. They get game from the woods ; skins bring them in whiskey and clothes, which they do not care for of a costly sort. Their habitual costume is a ‘rifle-shirt’ or shirt of fringed linen ; instead of stockings they wear Indian leggings ; their shoes they make themselves for most part. When they go out to hunt they take with them a blanket, some salt, and a few pounds of meal of which they bake rough cakes in the ashes ; for the rest they live on the game they kill. Thus they pass 10-20 days in the woods ; wander far around ; shoot whatever appears ; take only the skins, the tongues, and some venison back with them on their horses to their cabins, where the meat is smoked and dried ; the rest is left lying in the woods. They look upon the wilderness as their home and the wild as their possession ; and so by this wandering, uncertain way of life, of which they are vastly fond, they become indifferent to all social ties, and do not like many neighbors about them, who by scaring off the game are a nuisance besides. They are often lucky on the hunt and bring back great freight of furs, the process of which are very handsome. Uncompanionable and truculent as this sort of men appear to be, and however they seem half-savage and, by their manner of life, proof against the finer feelings, one is quite safe among them and well treated ; they have their own way of being courteous and agreeable which not everybody would take to be what it is. Their little house-keeping is, for their situation, neat ; and their wives and children are content in their solitudes where for the most part they spend the time in idleness."
Johann David Schöpf  1777-1784.
My sincere thanks to Spence at http://minuteman.boards.net/thread/225/backwoodsmen?page=1&scrollTo=1518 for sharing this information.

Historical Laundry Part 3: The Evolution Of The Washing Machine

Historical Laundry Part 2: No Washing Machine, No Dryer, Hit It With A S...

Historical Laundry Part 1: Who Did The Laundry In The 18th Century?

Australian Survival and Preppers..: Thoughts For The Week 18th June 2019 By Ron Owen.

"Together we stand, Divided we fall"!  We have already lost the right to use a flintlock, matchlock or wheellock pistol off range!!!

You need to read this article.
Posted by Keith at 16:54 No comments:

"Respect for the Ancient Ones" By Robert Griffing. 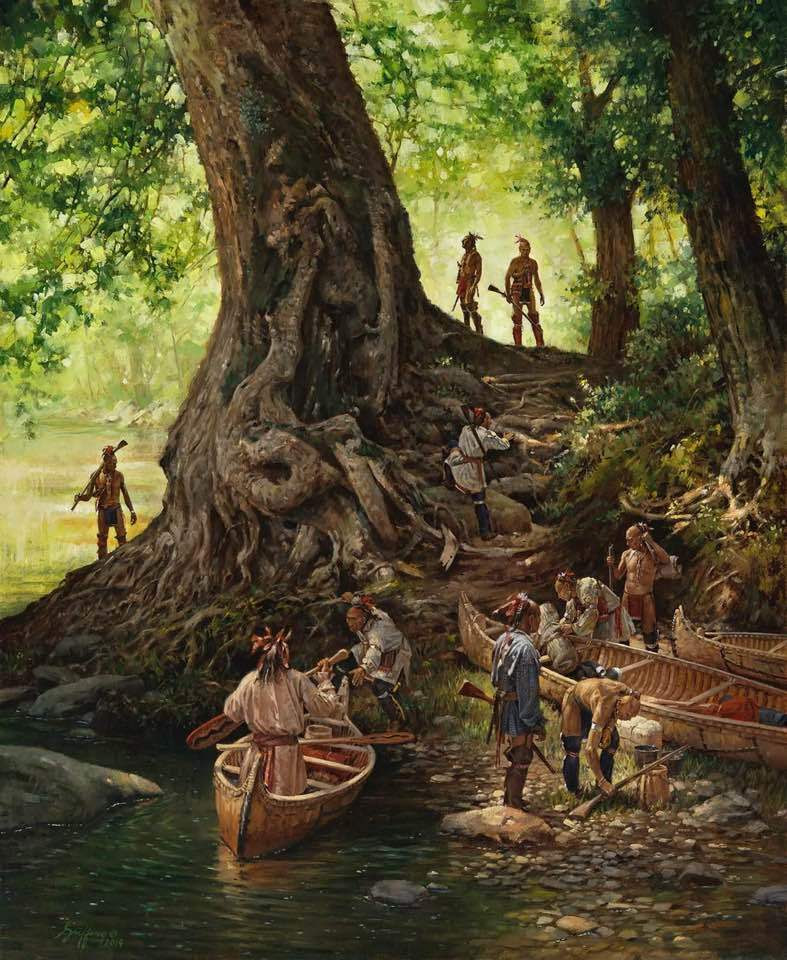 "Respect for the Ancient Ones" By Robert Griffing.
https://lordnelsons.com/; 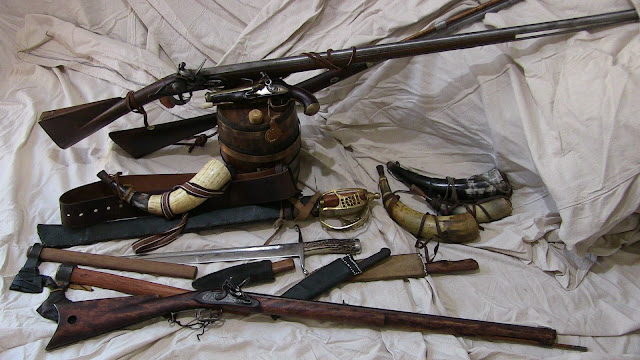 17C American Women: Sailing for America 1649: Article from The Salisbury Times (now called The Delmarva Times ), Salisbury, Maryland - October 28, 1964 from the Delmarva Heritage Series...
Posted by Keith at 21:38 No comments: