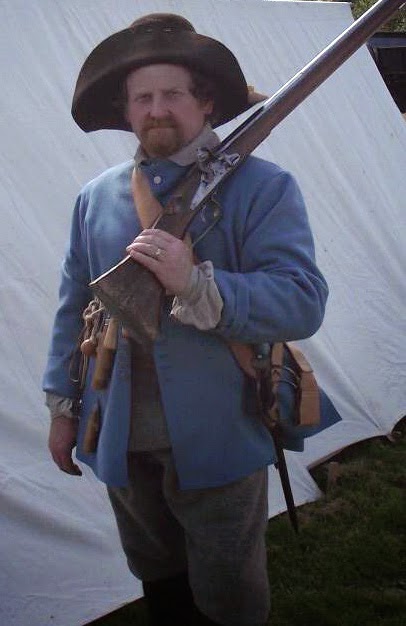 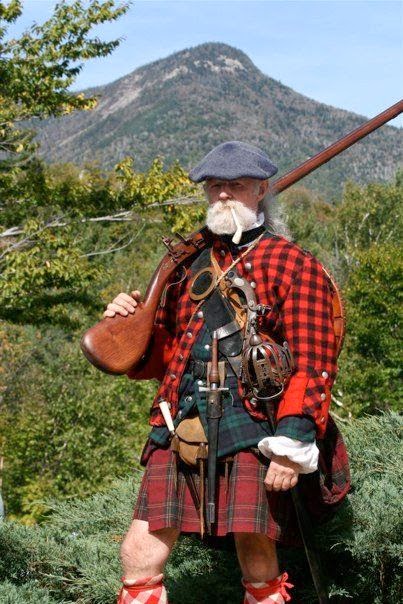 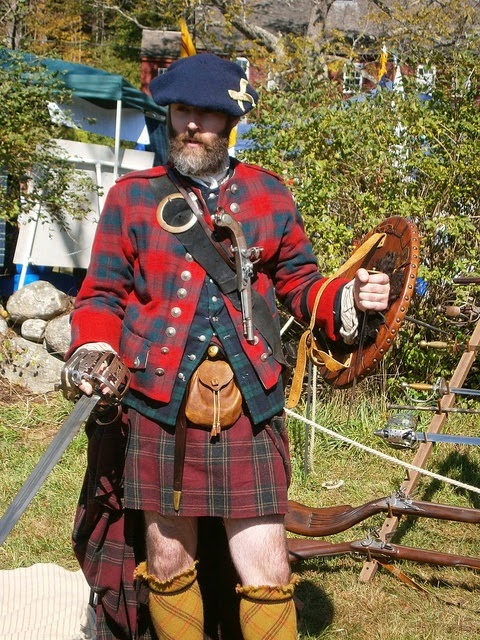 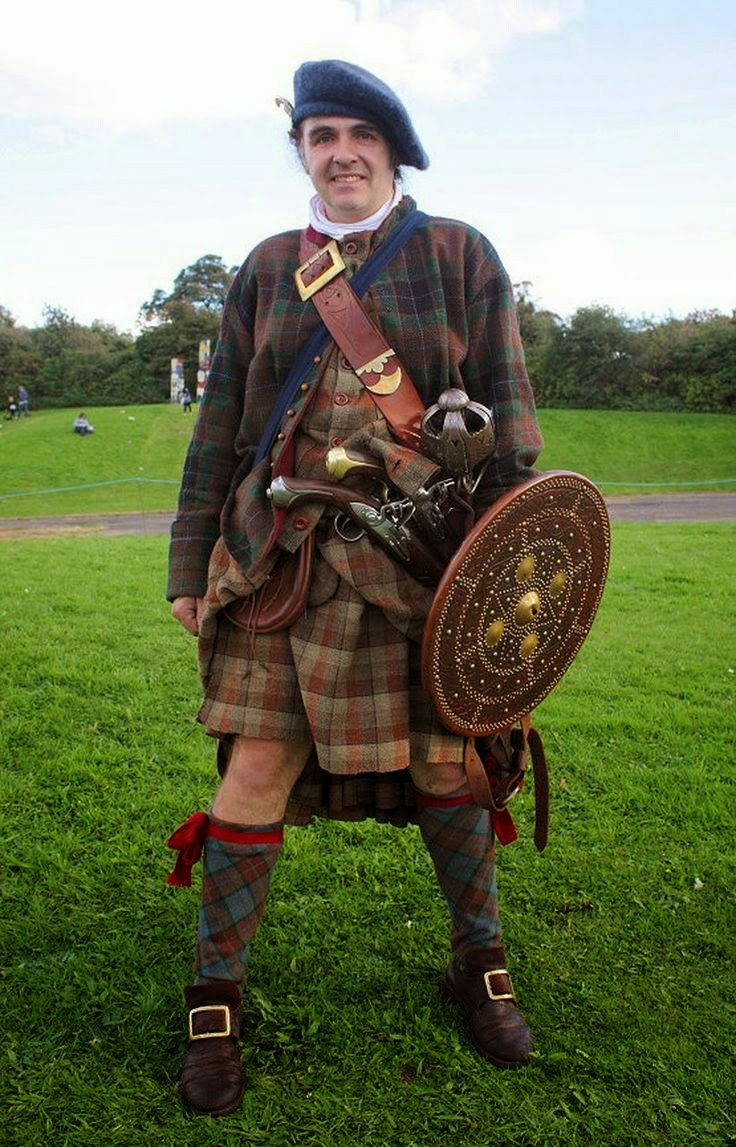 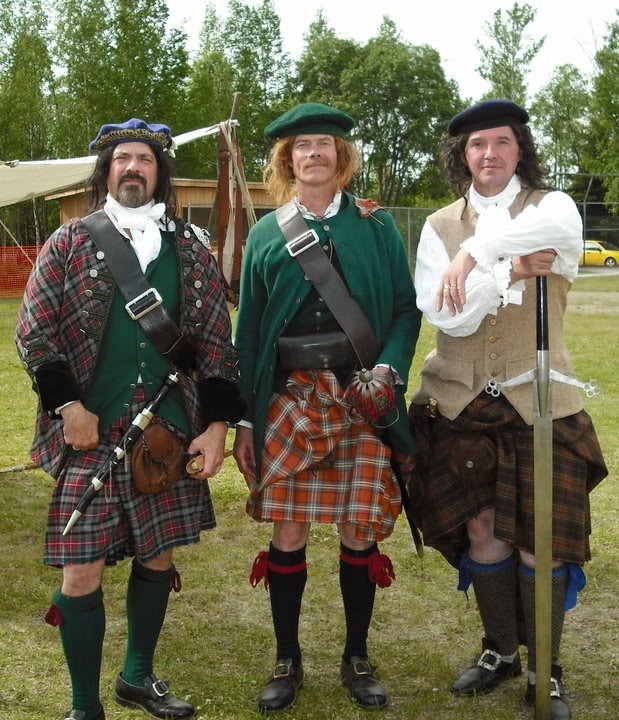 This video has been produced from documentary footage.  My thanks to the Producer Mr Alex Cuff for allowing my own camera to be included and for giving me permission to use this footage. My thanks also to the Cameraman Kaelem E. Burgess for handling both cameras.
Keith.

Civilian knapsacks were of many different sizes, some were home made from a haversack. The flap on the knapsack was commonly secured by three buttons, but it was not unusual to see them with only two buttons. Chest straps were fitted to some to stop the pack from moving about. The chest strap was made in two parts each half was stitched to a shoulder strap and to secure it across the chest was a buckle.
Some were painted to make them water resistant, but the majority seem to have been plain linen or hemp. 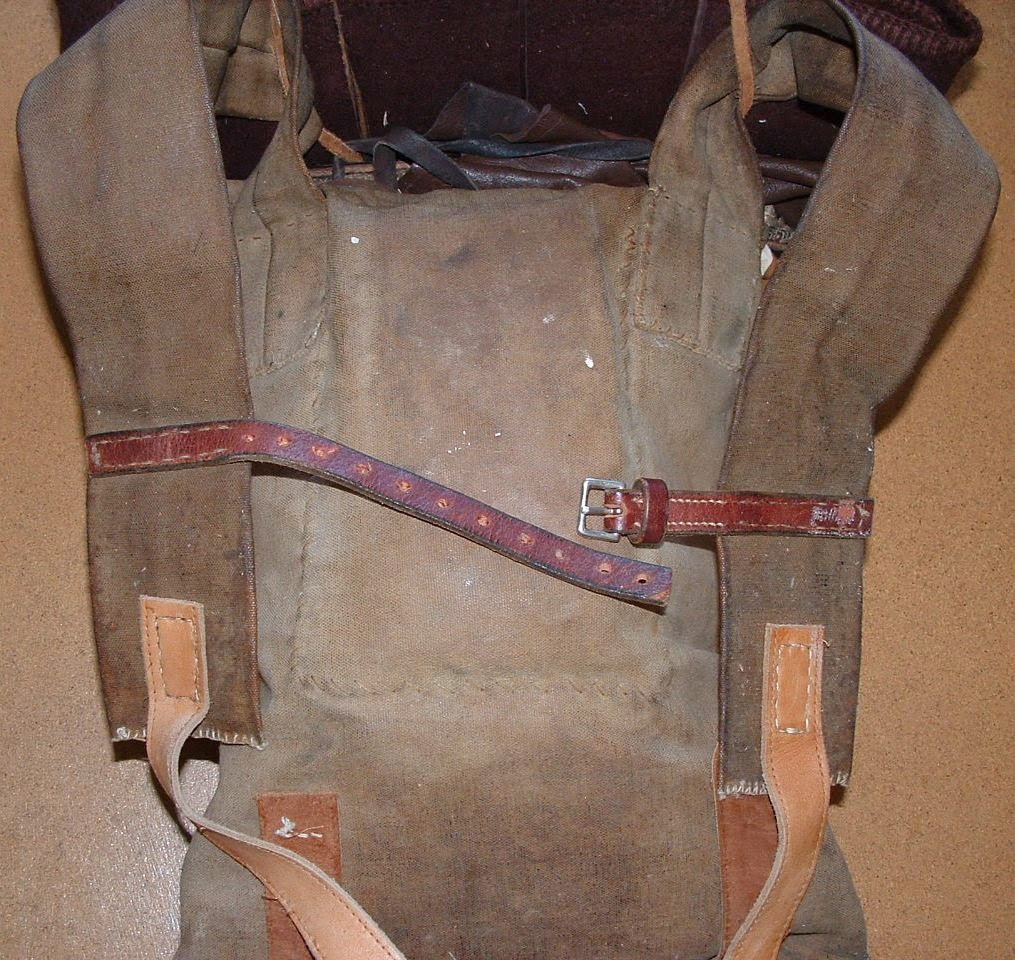 This image shows the attachment of the chest strap on my own knapsack. This was made by converting a haversack. 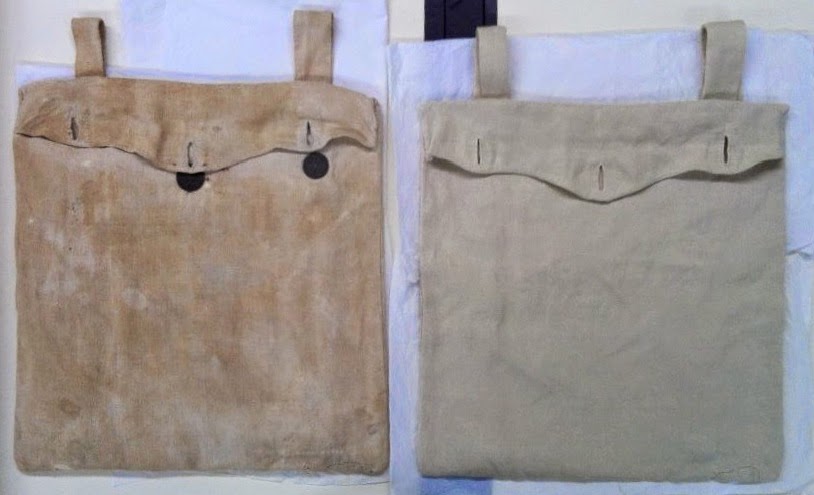 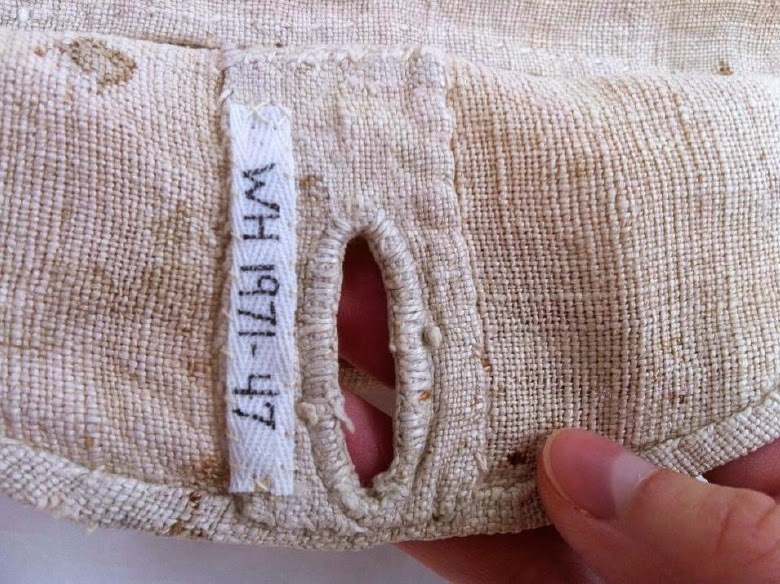 Detail of the making of the eye on the flap on the inside. 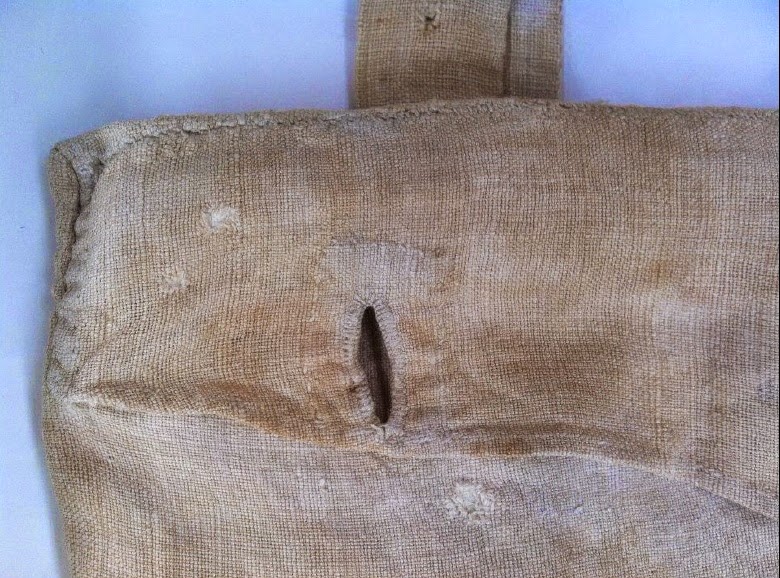 Detail of the eye on the outside of the flap. 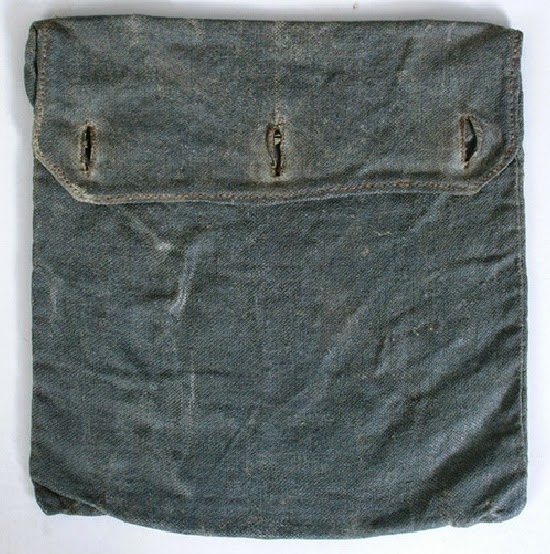 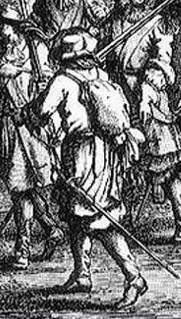 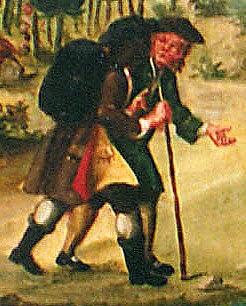 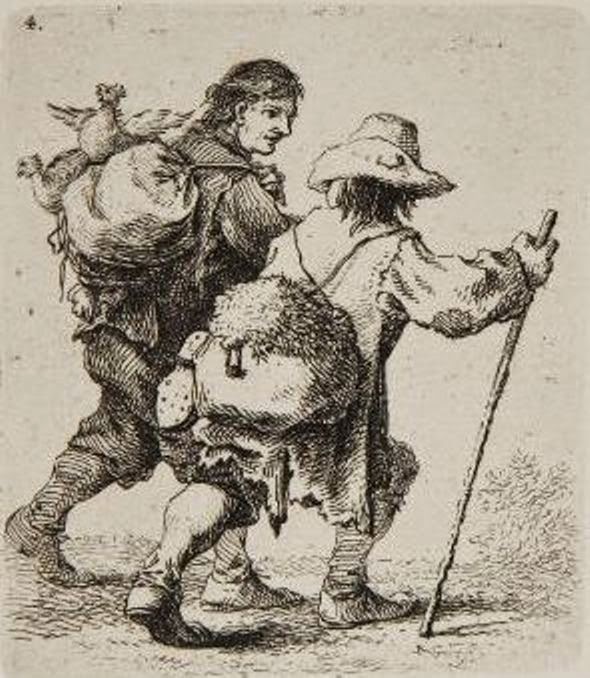 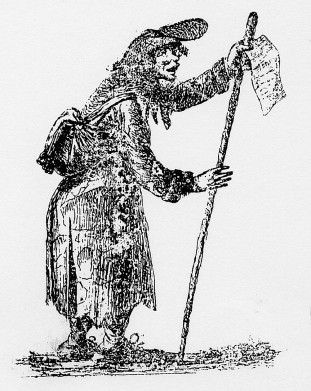 "He was on horseback; I on foot bearing my knapsack".
"After breakfast, I bade my host farewell, buckled on my knapsack and left".
Daniel Boone. The Project Gutenberg EBook of Daniel Boone, by John S. C. Abbott.
My understanding of the above quote, is that Boone's knapsack was equipped with a chest strap.

A Knapsack with strap and buckle.
Lieutenant Archibald Bailey of the 60th
Regiment to Colonel Bouquet.

"we had Pitched our Tent and made a very Large Fire we pull’d out our Knapsack in order to Recruit ourselves every one was his own Cook our spits was Forked Sticks our Plates was a Large Chip as for Dishes we had none”
George Washington 1748 at 16 years of age.

"Militia minutemen hold themselves in readiness at a minutes warning, compleat in arms and ammunition; that is to say a good and sufficient firelock, bayonet, thirty rounds of powder and ball, pouch and knapsack." (Town of Resolves, .)


“I gave orders to them to go home and fetch their arms whether guns, swords, pitchforks, axes or whatsoever might be of use against the enemy and for three days provision in their knapsacks”
Letter to Gov. Morris, from Conrad Weiser, Esq. 10/27/1755 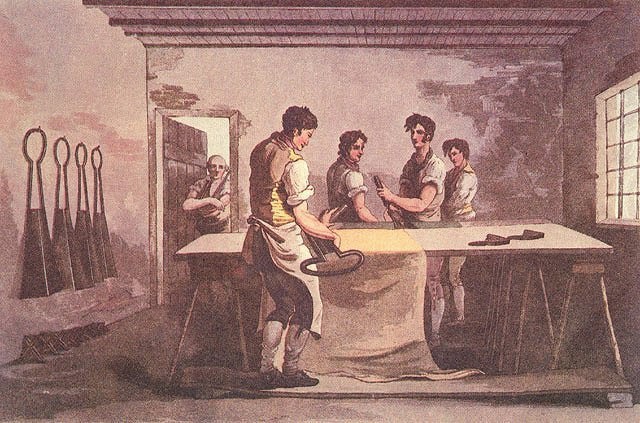 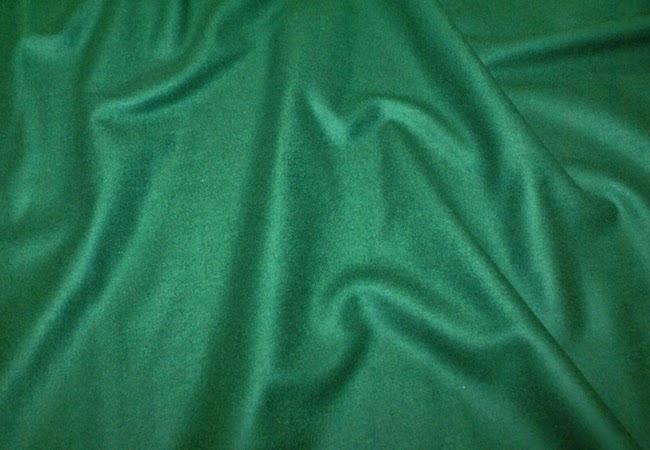 COLONIAL AMERICAN DIGRESSIONS: COLONIAL ROADS AND HIGHWAYS:   Jamestown Virginia had roads in 1615 Courtesy of Getty Images The road along the shoreline turned inland at the left end of t...
Posted by Keith at 00:11 No comments: 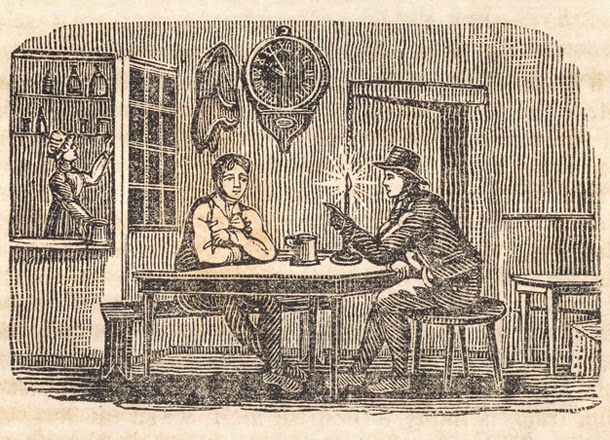 http://drinks.seriouseats.com/2014/04/colonial-era-drinks-cocktails-rum-flip-stonefence-syllabub-rattleskull.html#.U0c4hDbtueE.twitter
My thanks to my friend Sara for this link. Sara's Blog can be found at: http://myneighborwellington.blogspot.com.au/
Posted by Keith at 23:39 No comments:

How NOT To Load A Musket!!!

This was the original loading method used by the British military in the 18th century, but you should NEVER prime the pan before loading the main charge.

COLONIAL AMERICAN DIGRESSIONS: SOME INDENTURED SERVANTS HAD TERRIBLE EXPERIENCES:   Virginia Gazette , 19 May 1774 Courtesy of the Smithsonian Institute and Colonial Williamsburg Foundation    LOVIN...
Posted by Keith at 19:39 No comments:

My Equipment In Close-Up, By Request. Video.

Operating A Lock Of A Wheelock.

This Week In Pennsylvania Archaeology: Gorgeous Gorgets: This week the letter “G” represents a commonly, but most likely misused term in archaeology: ‘gorget’. The issue with using the term ‘gor...
Posted by Keith at 01:14 No comments:

COLONIAL AMERICAN DIGRESSIONS: SOME ONE ROOM COLONIAL HOMES:   Early 17th Century one room straw hut  (covered with mud on the outside) Salem Village Photo Courtesy of Jennifer Sartell ...
Posted by Keith at 18:18 No comments:

COLONIAL AMERICAN DIGRESSIONS: COLONIAL MEALS WERE FATTENING: Colonial Apple Pie Courtesy of Gardner Pie Company   Bread-making is older than recorded history and was part of the d...
Posted by Keith at 18:13 No comments:

Another Plant Tinder For Fire Making.

As I have said many times before, once you become familiar with what plant tinders look like & feel like, you can start to identify many more. Some such as the beaten inner bark of the Stringybark Tree are not so readily recognised, but still the same thought processes enabled me to see the possibilities.
The inner core of the Sunflower plant again is not so readily identified, just like the inner core of the Yacca Plant, it is hidden from view until the stem is cut open. Here in the images below you can see the soft white pithy core of the Sunflower stem. Treat this as you would punkwood, & char it to prepare it. This stem is still green so you can better see the core, but for tinder use use only the dried stems.
Not a native to Australia, but many of you may grow Sunflowers in your gardens, as we do for chook feed. The Sunflower is believed to have originated and was first domesticated in Mexico. The Sunflower is a member of the Jerusalem Artichoke, which is native to the Great Lakes area in the Americas. The stem pith of the Jerusalem Artichoke can also be used as tinder, but the stems are much smaller and thus yield far less tinder. 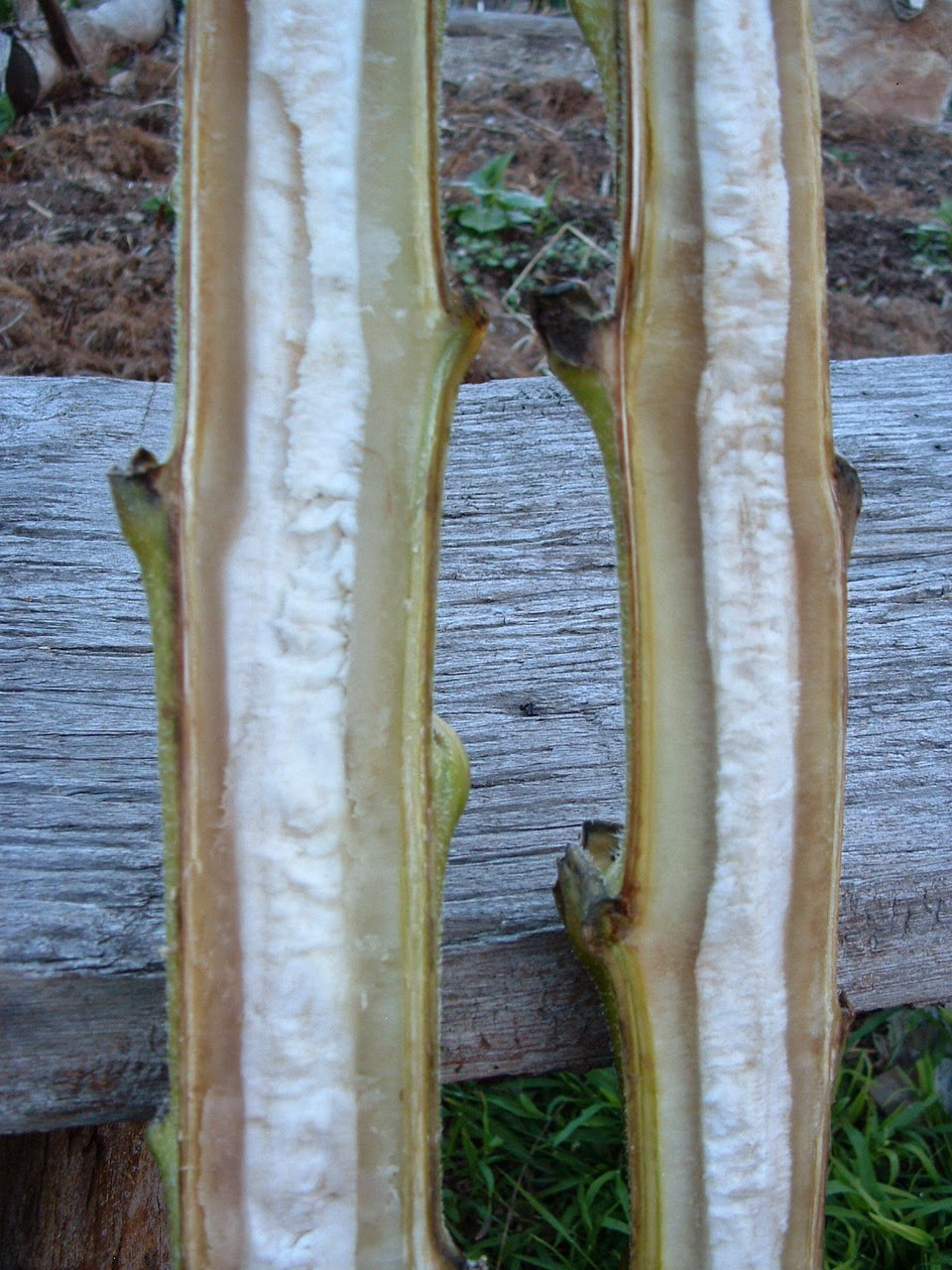 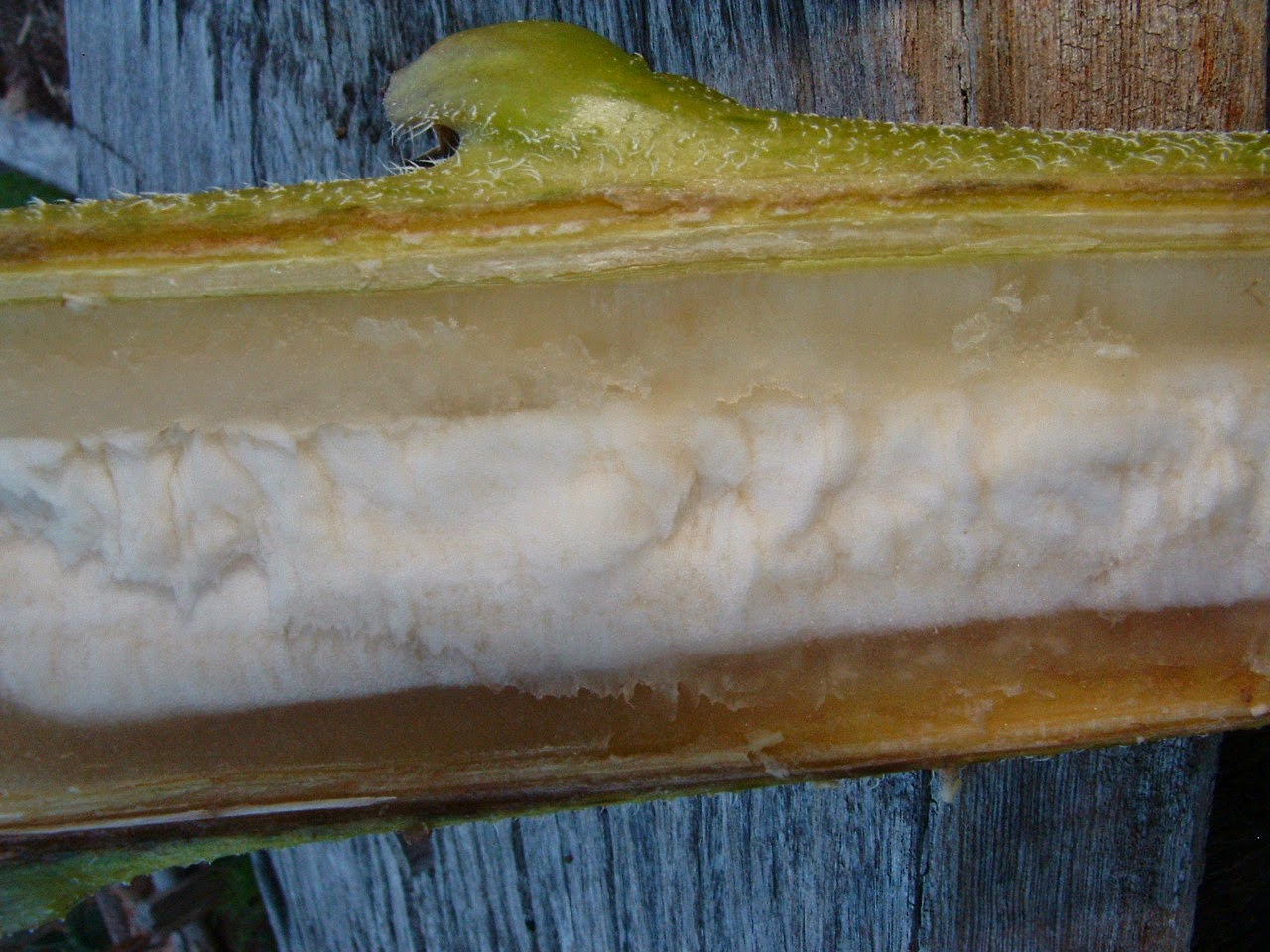 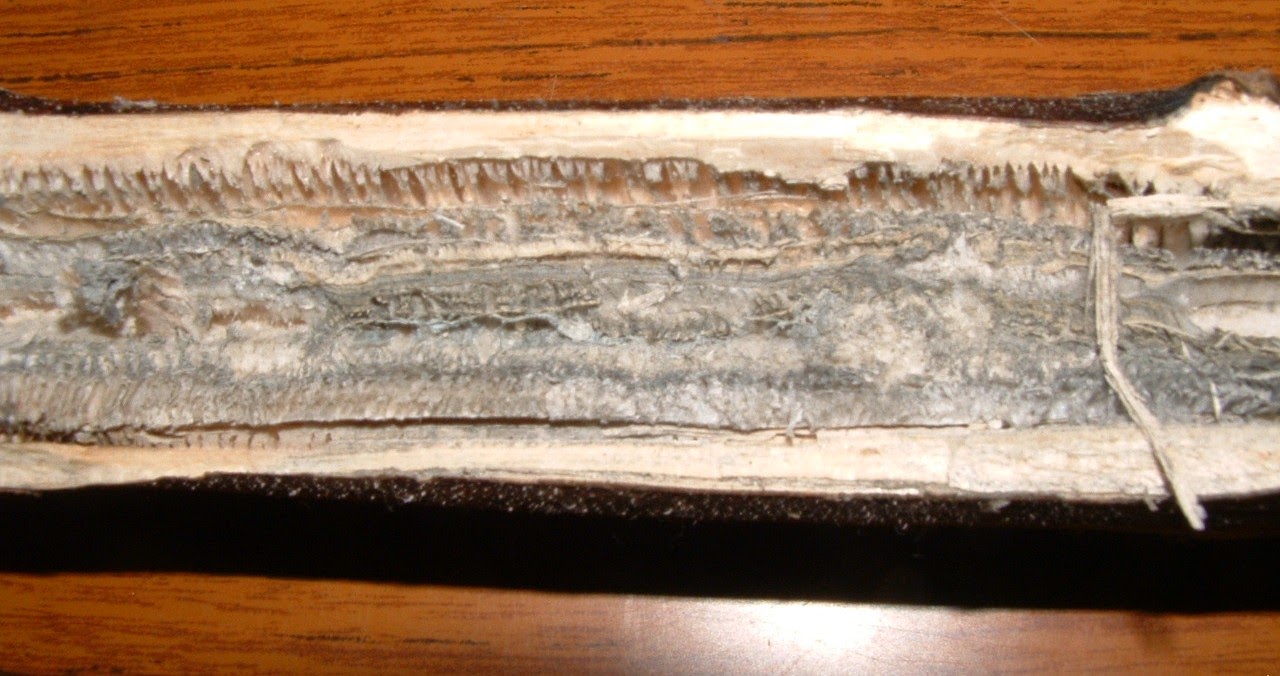 This is a dried Sunflower stem cut open. 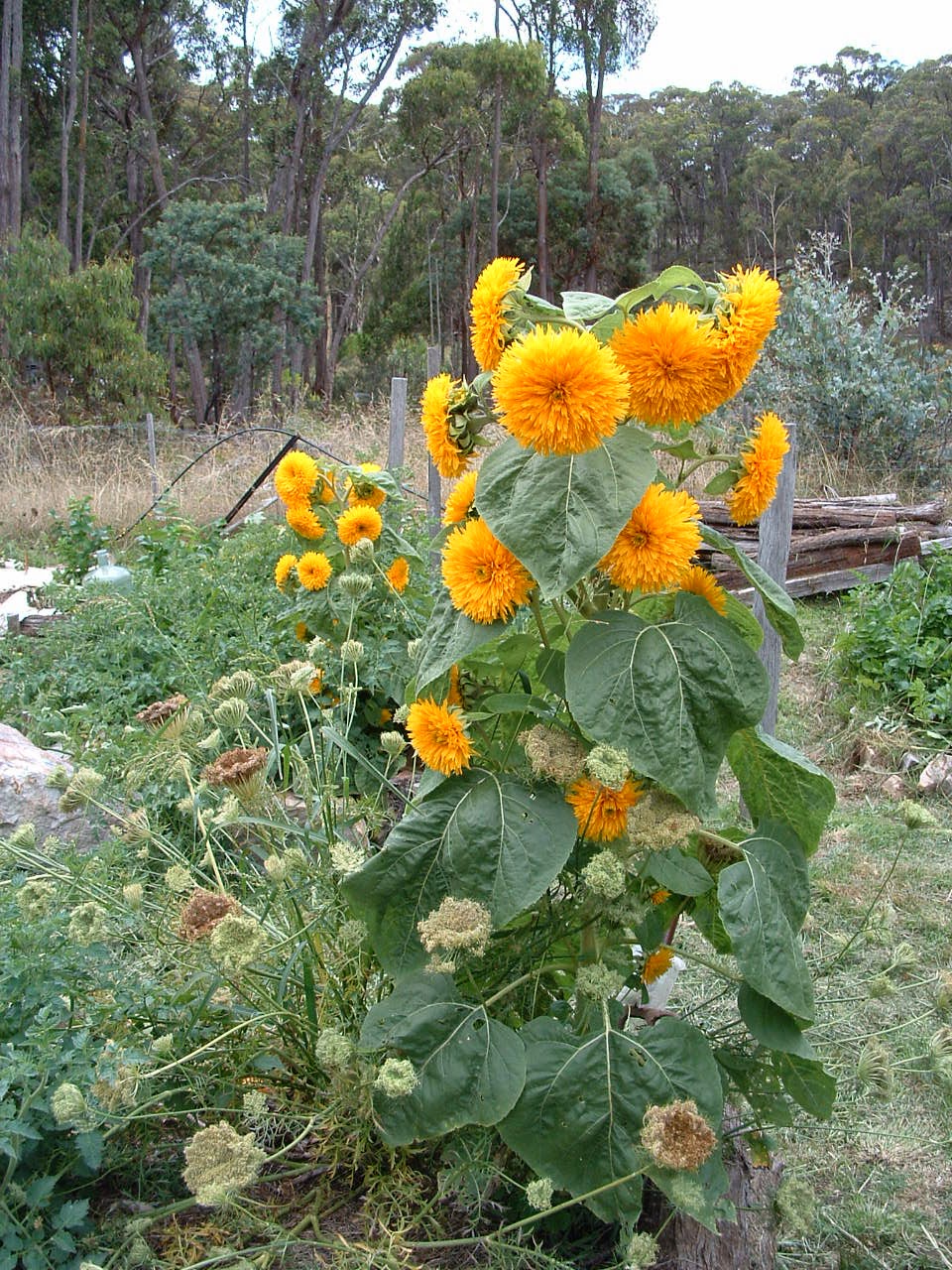 Another type of Sunflower in our garden with multiple flower heads. 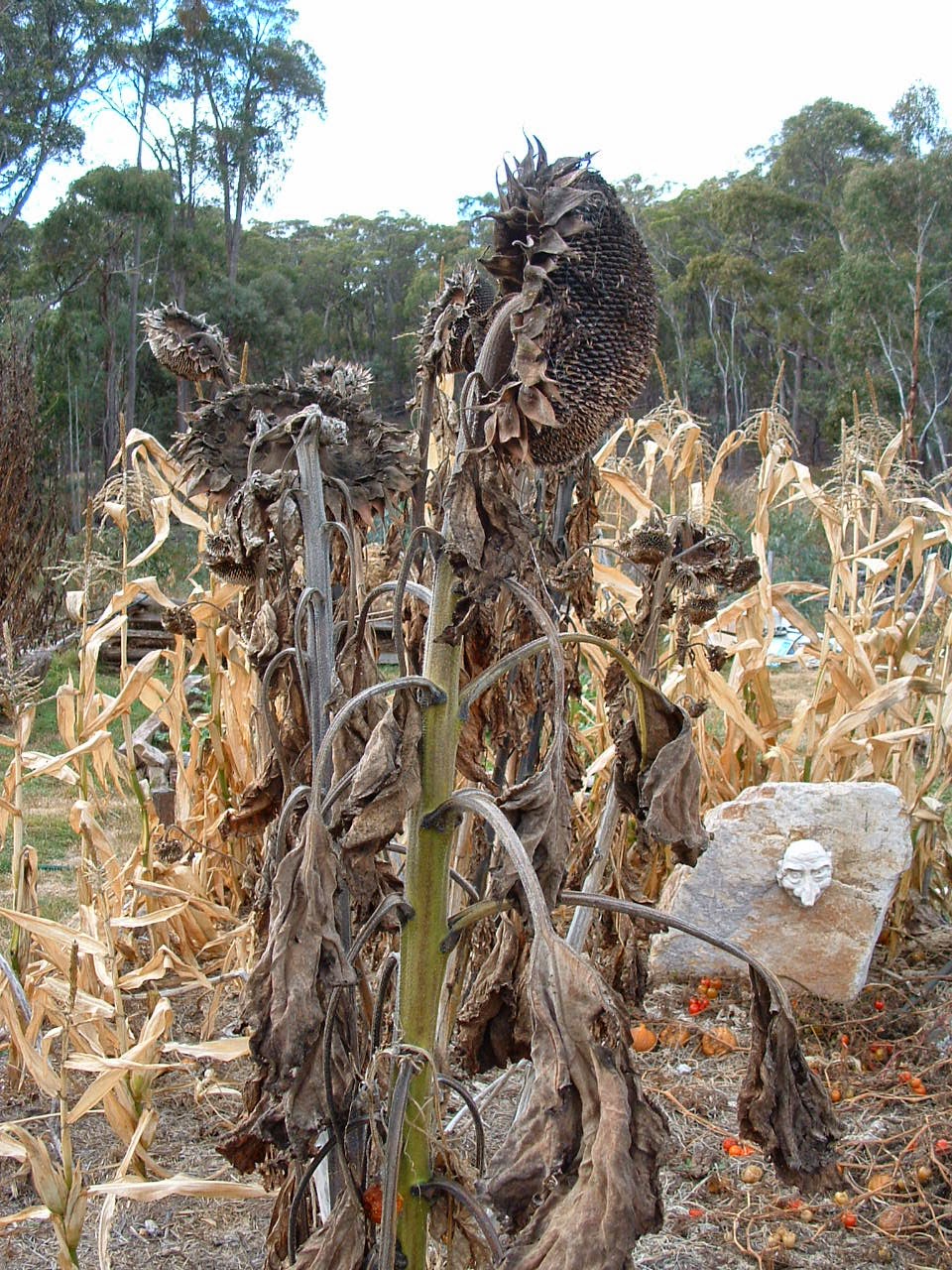 Sunflowers drying in the sun in front of a stand of corn. 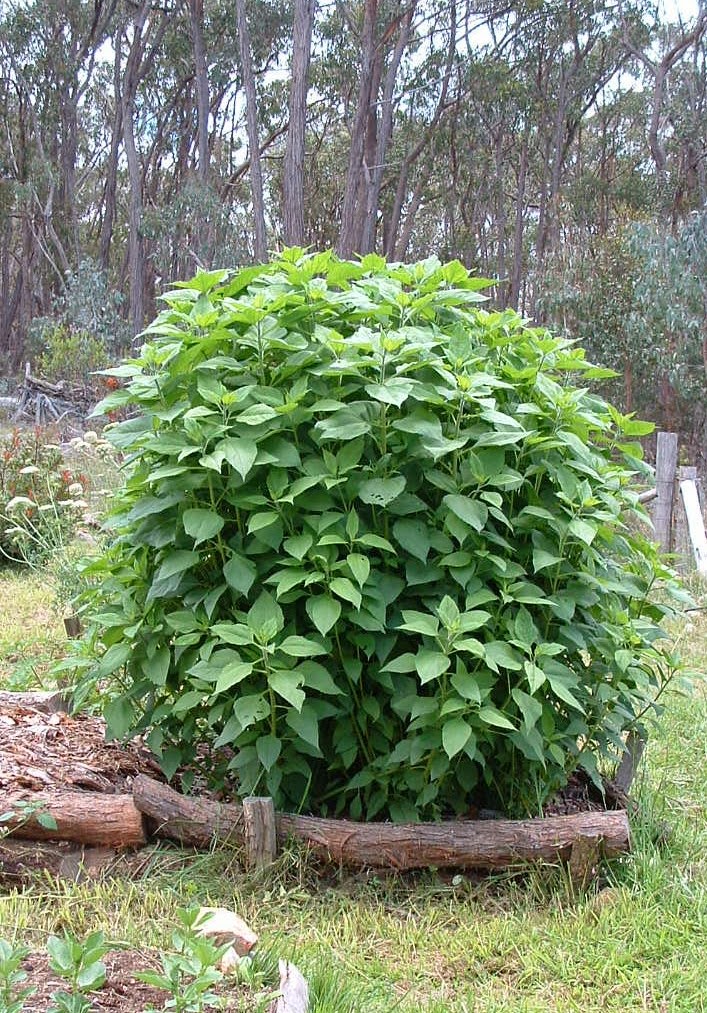 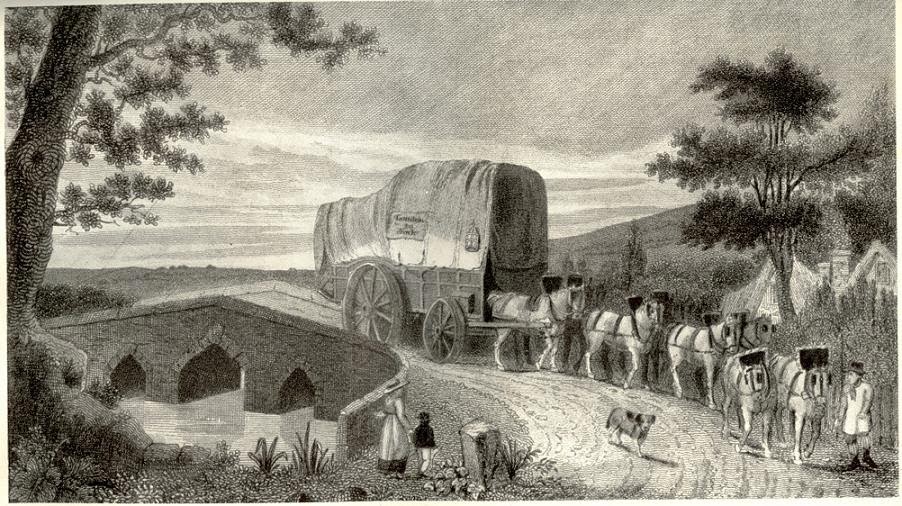