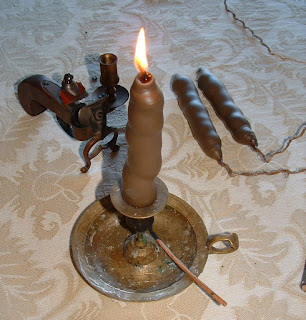 
Candles & Candle Wicking  18th Century.
Pensive I lay, e'en from the dead of night,
Until the sun his daily course began,
Reflecting on the candle's wasting light,
And moraliz'd the fate of mortal man.

White and unsully'd was that cotton wick,
When from the chandler first to me it came;
Behold how black! the greasy drops how thick!
Such colour takes it from imparted flame.

Such is the youth, of manners strict and pure,
Till led by vice he quits his reason's guide;
By flatt'ry drawn, he stoops to vice's lure,
And from the paths of reason wanders wide.

His passions melt, his manly vigour faints,
Nor mourns he ought his former vigour gone,
For foul society his former morals taints,
And mother Douglas marks him for her own.

The fool who sells is freedom for a smile,
Or for a ribband barters peace of mind,
Like wasting wicks just glimmers for a while,
Then dies in smoke, and leaves a stink behind.

The many perils that ambition wait,
When soaring high, we still the lower fall,
Are but the SNUFFERS of expiring light,
And death's the grand EXTINGUISHER of all.
Elegy on a Tallow Candle - Unknown, 1762

Old Days, Old Ways: An Illustrated Folk History of Ireland
Cotton candle
A CANDLE with a COTTON WICK. Since this appears in the sixteenth century, presumably made because it gave a better product than any of the alternatives, the eighteenth-century occurrence of the term 'cotton candle' in the Dictionary Archive is surprisingly late.
OED earliest date of use: 1587
¶Sources: Inventories (late).
https://www.british-history.ac.uk/no-series/traded-goods-dictionary/1550-1820/cotton-cotton-yarn#h2-0002
In Edinburgh in the sixteenth century it would appear that candle wicks were of two types: rag wick and hard wick.
Although rag wicks are described in slightly more detail in other sources, the hard wick is rather obscure, possibly referring to a wooden core, as with candle-fir, though this is speculative. It is clear that the rag wick was more expensive, with candles of rag wick costing 9d. per pound, and hard wick 8d. per pound .
The description of rag wick is slightly clearer, as this type was quite literally made of old rags.
One Aberdeenshire example, from a inventory of Bishop Alexander Gordon’s palace, states that the wardrobe contained ‘five payr of riffyneschet is ane yer of sewit with sylk for candliweik-kis’.
While it is quite telling that a bishop would have his servants make candle wicks out of silk rags, they were rags nonetheless, demonstrating a lack of waste and propensity to recycle which were just as familiar to the islanders of Coll, when in 1773 Samuel Johnson noted that they made their own candles with wicks of ‘small shreds of linen cloth’.
Apparently not all wicks were made of old rags, though, as the  ‘Book of the Rates of Customs’ shows, imported ‘candle week is the hundreth weight’ could be had for £3.
https://www.academia.edu/42120239/Production_and_the_Missing_Artefacts_Candles_Oil_and_the_Material_Culture_of_Urban_Lighting_in_Early_Modern_Scotland
Wicks were made from cotton,  hemp,  or,  less often,  from milkweed.
http://passionforthepast.blogspot.com/2016/09/candles-light-at-its-brightest.html 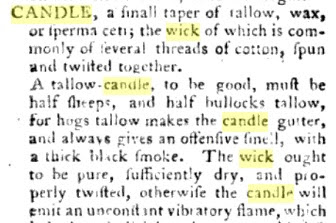 The Whole Law Relative to the Duty and Office of a Justice of the Peace : Comprising Also the Authority of Parish Officers. Volume 1 of 4 1800ad; 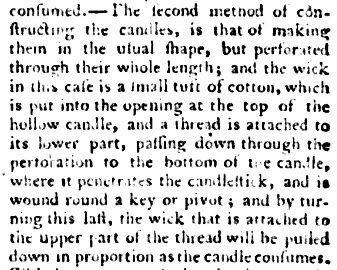 US Textile Production in Historical Perspective: A Case Study from Massachusetts;

History of the Cotton Manufacture in Great Britain; 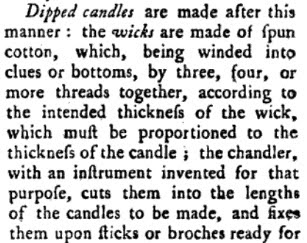 
At the same Place is made and sold, fine CANDLES, which being made of neat, clean Tallow, and fine Cotton, free from any Mixture of Adulteration, will burn longer, give a brighter Light, and better Smell, than those Stuff called Candles sold in the Market, or any of them which are mixed or made of Yarn, Tow, &c.
The Pennsylvania Gazette
December 26, 1765

To purify Tallow.
Take 58 of tallow, 38 of mutton-suet, melt them in a copper caldron, with half a pound of hot water to each pound of grease. Then, as soon as they are melted, mix eight ounces of brandy, one of salt of tartar [potassium carbonate/pearl ash], one of cream of tartar [potassium bitartrate], one of sal ammoniac [ammonium chloride], and 2 of pure dry potash [potassium chloride & others]. Throw the mixture into the caldron, and make the ingredients boil a quarter of an hour; then let the whole cool. The next day the tallow will be found on the surface of the water, in a pure cake. Take it out and expose it to the action of the air, on canvass, for some days. It will become white, and almost as hard as wax. The dew is very favourable to its bleaching; make your wicks of fine and even cotton, give them a coat of melted wax; then cast your mould candles. They will have much the appearance of wax, and one, six to the pound, will burn 14 hours, and never run. 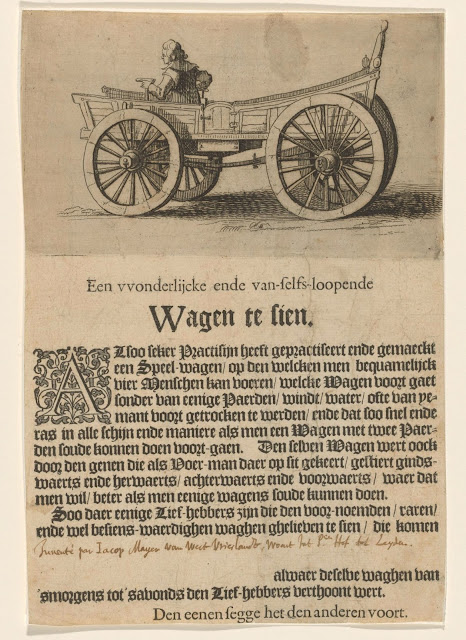 http://www.deadlinenews.co.uk/2020/03/27/university-researchers-give-rare-insight-in-new-book-on-17th-century-ad-men/
Posted by Keith at 16:43 No comments:

New Book. By Great Rivers By Robert B. Swift 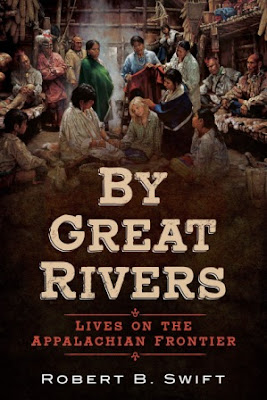 This new book tells the story of 18th century people (men and women, Native Americans, colonial agents, missionaries, fur traders, Indian captives, surveyors) living in the Appalachian region of eastern and western Pennsylvania, western New York and Ohio. Many key historic events occurred at the strategic forks of four rivers where these people lived or visited--the Forks of the Delaware (Easton, PA), Forks of the Susquehanna (Sunbury, PA), Forks of the Ohio (Pittsburgh, PA) and the Forks of the Muskingum (Coshocton, OH) and the Niagara River, pathway between the Great Lakes.
Each historical figure is given a brief yet thorough description and the book as a whole includes quotes from contemporary travelers, diarists and prominent figures like Benjamin Franklin to provide context to help readers understand the period.
Paperback, 2019, 6" x 9", 112 pages, multiple b/w and full color illustrations & photos, $21.99.

The Use Of Firearms By Minors Australia - The Loose Cannon 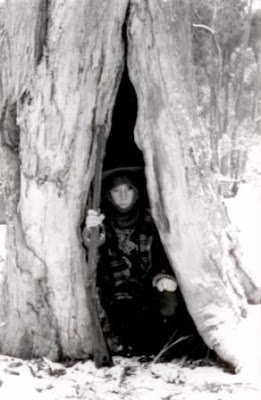 My eldest son with a .32 caliber flintlock rifle when he was a youngster.

The Use Of Firearms By Minors Australia - The Loose Cannon
http://www.sportingshooter.com.au/latest/the-use-of-firearms-by-minors-australia-the-loose-cannon