Some pencils were lead, hammered out of a musket ball, but pencils using graphite (also refered to as lead and black lead) existed during the 16th century. I am still searching for images, and have only come across one so far. 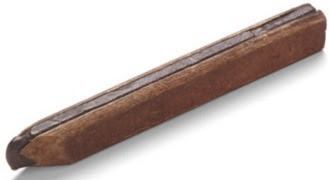 The one above was found on a house beam in a 17th century house in Germany. Quite possibly a carpenter's pencil.

This is one I have created from a modern carpenter's pencil.
I shall keep researching the pencil because I feel there is still more to learn. I can tell you that the first graphite was found, or at least recognised, in the township of Barrowdale in Cumbria in England. A tree was blown over in the town, and a passer-by spotted a black mass in the roots of the tree. It was said to feel greasy. The locals soon started using it for marking their sheep, later it was mined for pencil making. It is said that the first graphite pencils were simply bound in cordage to keep the graphite from marking the hands.﻿
Posted by Keith at 22:03

Ha! And I always wondered. Now I know and will put one in my haversack.

I rebuilt a dilapidated log cabin circa 1867 and was surprised when I found the owners name written on the top of a log in Germanic like letters. All the notches were marked with pencil as well.

Oh wow! What a great feeling that would be, half your luck. Thank you for the information, much appreciated.
Regards, Keith.

Hunh. Left on top of a beam. I wonder *however* it could have ended up there. :p

It still drives me crazy wondering how they get the graphite into modern pencils. But I refuse to find out. Gotta leave just a little wonder in the world.

Craig. Yes I will go along with that, though no doubt someone will tell us one day.
Keith.

A very interesting post on the quill pen, pencils and writing Keith. I have always loved the writing back then and only 2 months ago bought myself a calligraphy set to try. I was lucky enough to see some of the old writing when I was working in an office just recently, I was processing data(certificates for "sales of land and properties )dated back to 1840+.I was overwhelmed with it all and the paper was still in quite good condition but very fragile.
Thank you and regards
Bron.

For me Bron, there is something very special about holding a piece of history in my hand.
Keith.