I purchased some dark cooking chocolate so I could try and reproduce the look of 18th century chocolate bars. I have no idea what was used to mold these bars originally, so I had to use some modern technology. I used a half egg box and some aluminium foil. 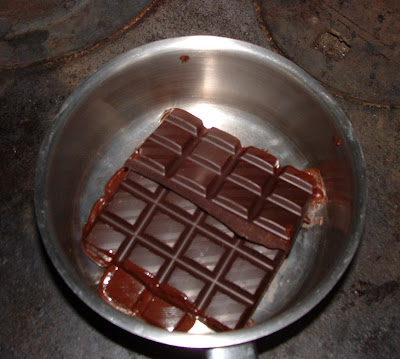 My wife said that I should have melted the chocolate in a kettle that was inside another kettle of water to stop the chocolate from burning! Next time. 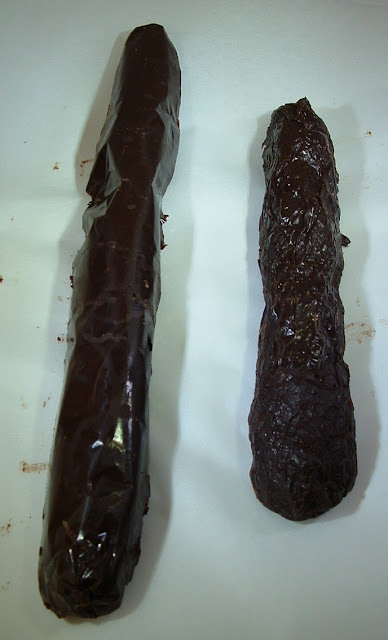 Turned out okay, but, the heating process has changed the chocolate in some way, because now it melts at the slightest touch where as it did not do so before melting!
I will have to try another method. More on this later.
Posted by Keith at 13:41

You might add a little beeswax; a lot of candies used to contain it for just that reason.

I did not know that Gorges, thank you.
Keith.

Proof of the chocolate is in eating it! How was it to eat?

Well drinking actually Remana, but no, I have not tried it yet.

I will check out the follow comments button.
Keith.

Hi Keith,
I believe you heated the chocolate too much. The process of making "snappy" chocolate is no easy task. It involves tempering. If you wanted to keep it snappy you have to stay below 94F. Grate your chocolate fine and only heat 1/2 to 2/3 of it. Once melted add the ground portion stir well and pour into cold molds. If you heat past 94F you are in for a heck of a process to get those Beta 2(Form V) crystals back. They knew this back then, though perhaps not the Beta terms.
Rick

So my wife tells me Rick, thank you. It is unanimouse then, I stuffed up! Better luck next time. I suppose I will just have to eat this lot & buy some more! The things I do for living history:)
Keith.

Better Luck next time. Although you gotta have to lower the heat and put some beeswax in it.