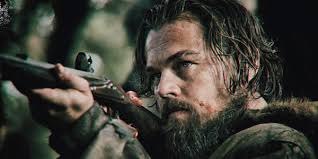 If you are a history buff, or know anything about muzzle-loading guns or even if you posses a normal degree of common sense, then don't bother watching this movie. There was apparently a 19th century living historian hired to train the actors in the use of muzzle-loading guns, but either this person did not know his stuff, or he was totally ignored. No one was present to adjust the on screen visual mistakes, either that or they simply had no clue either!

Very few historical facts in this movie, which is a great pitty because the real story, IF DONE PROPERLY, would have been worth watching. There are simply too many mistakes in this movie to make it worth watching from my point of view. I thought that after the Last Of The Mohicans, some breakthroughs in historical accuracy had actually been made, there were some mistakes, but they could be ignored, but in The Revenant, there are more mistakes that you can shake a stick at & for me at least it spoilt the whole movie. If DiCaprio wanted an Oscar for his part in this film, then he should have done his own research & made his own part more believable. I find it really hard to believe that in this day & age film makers are still unable to make a decent historical based movie of this type. Very disappointing.
Keith.

They obviously never get knowledgeable folks to consult on the films. I never watch such films anymore for that very reason. In fact, I haven't seen ANY film in at least five years for the simple reason that no-one MAKES good films anymore. Everything is either smutty trash, thrills at the cost of commonsense, poorly done, or is a political cartoon in disguise. No thanks.

I know most " historic " movies are far front, already the firearms choices are better and more accurate then say a trapdoor Springfield with a frizzen attached or an 1873 single action army mocked up to look like a cap and ball revolver ala' "The Wayne-and " in the sixties! Cheers, Andrew.