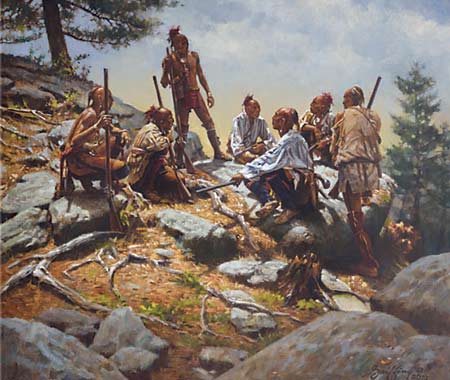 Indians At War.
"Their Arms are a Gun and Tomahawk, and all the Provisions they carry from Home is a Pouch of Rockahominy. Thus provided and accoutr'd, they march towards their Enemy's Country, not in a Body, or by a certain Path, but Straggling in Small Numbers, for the greater convenience of Hunting and passing along undiscover'd. So soon as they approach the Grounds on which the Enemy is used to hunt, they never kindle any Fire themselves, for fear of being found out
by the smoak, nor will they Shoot at any kind of Game, tho' they shou'd be half Famisht, lest they might alarm their Foes, and put them upon their Guard. Sometimes indeed, while they are still at some distance, they roast either Venison or Bear, till it is very dry, and then having Strung it on their Belts, wear it round their Middle, eating very Sparingly of it, because
they know not when they shall meet with a fresh Supply. But coming nearer, they begin to look all round the Hemisphere, to watch if any smoke ascends, and listen continually for the Report of Guns, in order to make some happy Discovery for their own advantage".