"Scrape four ounces of chocolate and pour a quart of boiling water upon it; mix it well and sweeten it to your taste; give it a boil and let it stand all night; then mix it again very well; boil it in two minutes, then mix it till it will leave the froth upon the tops of your cups."
1769 in The Experienced English Housekeeper:


Benjamin Franklin secured six pounds of chocolate per officer as a special supply for soldiers marching with General Braddock’s army at the onset of the French & Indian War. Connecticut soldier Daniel Sizer supplemented his meager diet on the northern New York frontier with rations of chocolate in 1759. Chocolate was supplied to the British troops during construction of His Majesty’s Fort at Crown Point, New York, in 1768. During the American Revolution, commissaries accounted for a steady supply of chocolate at such northern defenses as Fort Ticonderoga, where Captain Moses Greenleaf regularly “breakfasted on chocolate”. In 1777 it was forbidden to export chocolate from Massachusetts, as it was required “for the supply of the army”.

And for your health:


Milk chocolate, or milk coffee, which is not made too strong of the coffee, or too thick with chocolate, may be taken in common, as breakfast or supper; milk porridge, leek porridge, etc. are very proper. Dry toasted bread, with honey, or some preserve, or marmalade of fruit, etc. may be eaten with the tea, chocolate, etc. where tea, or any of the above things do not agree, some of the aromatic herbs may be used as such.


Thomas Hayes, 1796. A Serious Address on the Dangerous Consequences of Neglecting Common Colds.


http://americanheritagechocolate.com/html/history/choco_health.htm
”Mr. Hill, Mr. Lucas, & I went to Mr. Burland’s to see his and his wife’s Pictures, & Breakfasted on Chocolate.”
Dr. C Morris 21 Feb 1721.
http://18thcenturydiary.org.uk/chocolate-and-tea/
I was amazed at how difficult it was to research chocolate. Though several companies claim to be using period wrapping, there is no documentation to back this up. Linen paper was available and this seems to be the most likely choice, but people would have wrapped their own to suit their purpose.
As to what chocolate looked like when produced for sale, the most likely shape is in bar form, but this too was hard to research. Chocolate was available in the 17th century:


In Bishopsgate St is an excellent West India drink called chocolate to be sold, where you may have it ready at any time, and also unmade at reasonable rates.
Public Advertiser 1657.

”One penny was spent on chocolata”
The account book of Sarah Fell of Swarthmoor hall.

November 1675.
"April 24, 1661 - Waked in the morning with my head in a sad taking through the last night’s drink, which I am very sorry for; so rose and went with Mr Creede to drink our morning draught, which he did give me in jocolatte to settle my stomach"
"November 24, 1664. About noon out with Commissioner Pett, and he and I to a Coffee-house, to drink jocolatte, very good; and so by coach to Westminster, being the first day of the Parliament's meeting."
Samuel Pepys Diary. 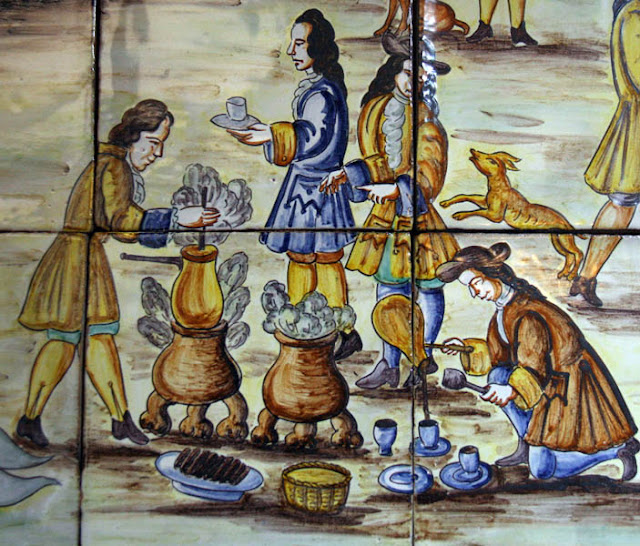 Here you can see the bars of chocolate ready for melting.
http://users.telenet.be/worldstandards/chocolate%20-%20history.html 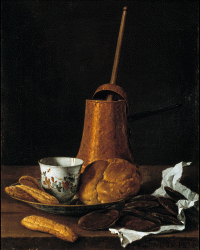 Luis Melendez 1715-1780. Here it appears that the chocolate has been made in biscuit form, and looks as though it was wrapped in linen paper.
As this chocolate was supplied in a solid form, there is nothing to say that the chocolate was not eaten as a food as well as being used for a drink. It would indeed make a reasonable trail food, though in its original form without added nutmeg, cinnamon, sugar or honey it would no doubt have tasted a little bitter.
I suggest that if you intend to produce your own chocolate sticks from melted dark chocolate, that you simply wrap it is paper and then place it in a linen or cotton bag.

This was so interesting. I knew nothing about the history of chocolate. Thank you for having such an informative blog.

Thank you Becky. I do try.
Regards, Keith.

I would think that adding dried fruit would temper the bitterness and add both sweetness and sugar-energy -- do you find any references to that?

Hi Rebecca. This chocolate was drinking chocolate, so adding fruit was not an option.
Keith.