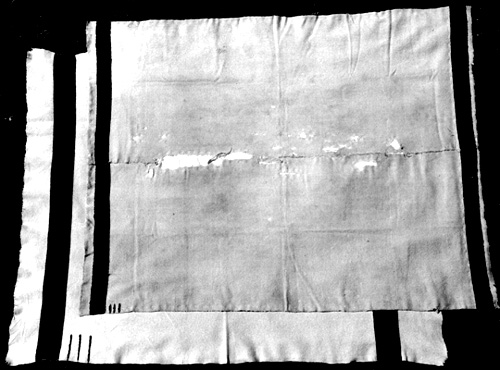 A 3-point blanket carried by Private Henry Marble of Massachusetts in the Revolutionary War. White wool, with 2 3/4 inch indigo blue stripes and points. Marble's blanket is in the foreground. Behind it is a 19th century 3-point Hudson's Bay blanket. Museum of the Fur Trade Collections, Chadron, Nebraska. Frederick C. Gaede and E. Bryce Workman, "Notes on Point Blankets in the Military Service," The Museum of the Fur Trade Quarterly, vol. 15, 2, (Summer 1979), 1-2. 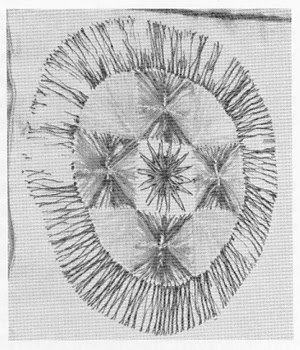 This is the "Rose" pattern placed in each corner of the Rose blanket.
Between 1711 and 1860 [the Early company] made what became known as the "rose blanket"...[with] motifs embroidered in the four corners....[varying] between 9 and 21 inches in diameter. Blankets were woven in one long length weighing a hundred pounds....The decoration was put on to show where the length should be cut up into individual blankets....Rose blankets were popular in America. 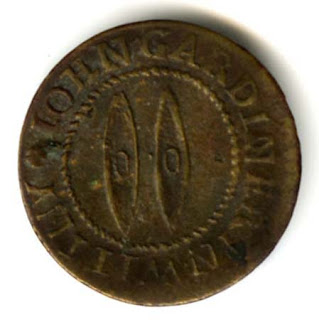 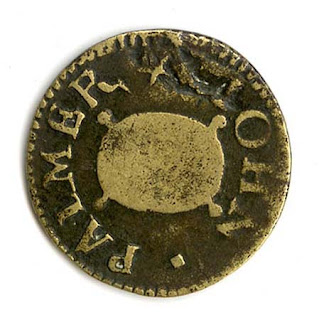 18th century Whitney Trade Token.
These are bona fide private coins issued by traders in times of acute shortage of coin of the state to enable trading activities to proceed. The token is a pledge redeemable in goods or in coin of the state, i.e. the face value of the coin represents the real value of the official coinage.
http://www.tokencoins.com/hist1.html#two
Cabin blankets for use at sea were first made in the early 18th century [3]. Many of these blankets would not have been of the best quality and were plain unbleached or dyed grey or olive. Townley. 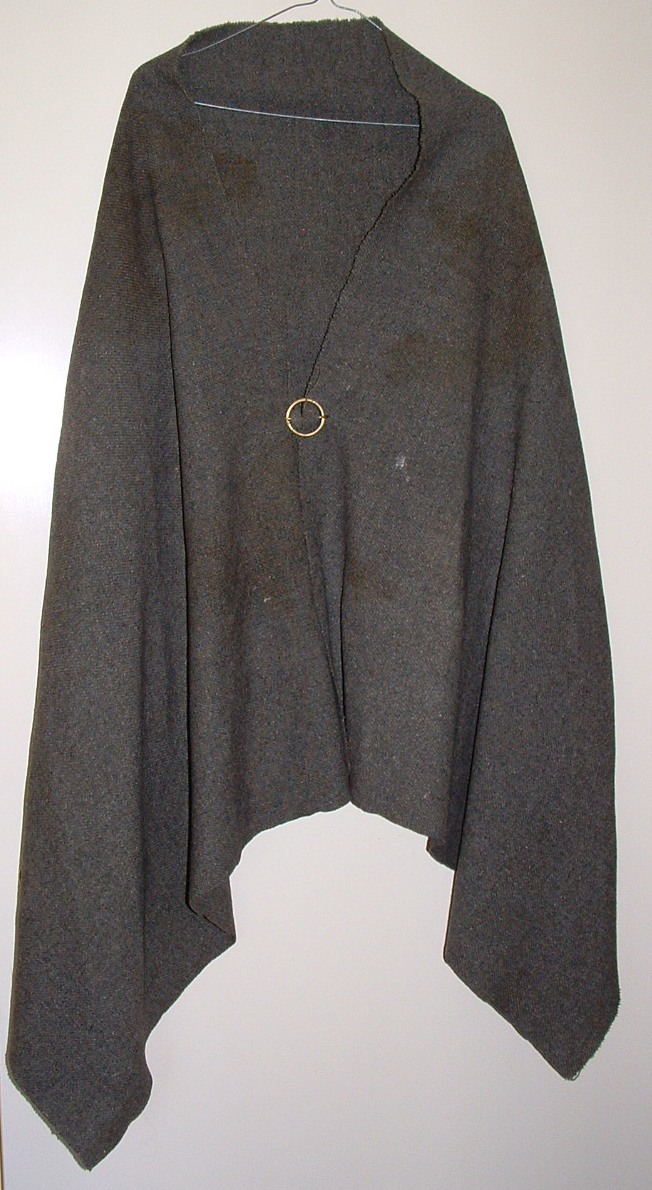 My Half-Blanket which I wear over my shoulders in winter. It is held together in front with an 18th century brooch.

, and one rug, most often GREEN or RED, although other colours have been noted. Typically, blankets were counted by the PAIR or in twos, whereas rugs came singly.
From: 'Ruff band - Rutherine', Dictionary of Traded Goods and Commodities, 1550-1820 (2007). URL: http://www.british-history.ac.uk/report.aspx?compid=58859  Date accessed: 30 December 2011.

Father Pierre Briard relates in the work Jesuit Relations and Allied Documents that in 1611 the Arcadian Indians "often wear our capotes, and in the winter our bed blankets which they improve with trimming and wear double". Also around this time Mother Marie de L'Incarnation recorded that she saw Indians wearing coats made from trade blankets.


Indians used white, red and blue blankets. "In 1663, ten Normandy "white" blankets are listed among the goods belonging to the trader Jacques Testad dit Loforet. The term "Normandy" refers to the location of textile manufacture. In 1693, during a council held in Montreal involving the French authorities and twelve foreign Indians tribes "no less than 83 white blankets were given as presents." Another important aspect of these blankets were that some bore embellishments such as red or blue stripes at their borders, embroidery, and lace. In fact we see that when the trader Jean Mailhot died in 1687 an inventory of his "la morte" possessions included "seven blankets made of capote cloth trimmed with nonpareille lace". (a very narrow strip of ribbon which was made of false gold, silver or silk) Drawings by Jesuit Missionaries recorded that this trimming in many instances was done in a zig zag pattern and consisted of two pieces of lace.
The actual sizes of trade blankets also differed. During the 1690's the French introduced the "point system". The term "point" then referred to a unit of measurement. In fact the French verb " ‘empointer’ was used to describe that action of making stitches with a thread on a piece of cloth". The historical norms of these blankets ranged from 1 to 5 points, 5 being the largest and 1 being the smallest known as "cradle blankets". http://www.scarletscarab.com/blanket-history.htm

Hi Shanon. I did not find any info suggesting that a particular weight was sold in any area. The point system was the indication of weight & size. The points ranged from 1 to 6 points. I guess one purchased whatever one could afford.
HUDSON BAY BLANKET WEIGHTS.
A full point measured 4 - 5.5 in.; a half point measured half that length. The standard measurements for a pair of 1 point blankets was: 2 ft. 8 in. wide by 8 ft. in length; with a weight of 3 lb. 1 oz. each. Points ranged from 1 to 6, increasing by halves depending upon the size and weight of the blanket. Hudson Bay site.

A 1725 invoice listing merchandise for a trade company in Green Bay listed 2-point blankets, and a 1766 invoice from a Philadelphia company listed 4-point, 3-point and 2 1/2-point watch coats.
http://hrd7.tripod.com/hbc/hbc.html

Thanks Keith, thats what I somewhat suspected. I've always wondered how a -40 below night was even with a big point blanket or two. I look forward to your blog everyday, Keith.

Doc, you made my day. Thank you, & thanks also for the questions.
Regards, Keith.