The Raven was my blood brother's granfather's name. I would like to share a story with you, one of many experiences I have had with wild animals. Perhaps this will explain how I feel about what I do, the way I see things, often differently to others. I always try to avoid getting spirtual in my writings, because it is often seen as strange and weird these days. But for those of us who live so close to nature that we believe we are an animal among other animals and we are a part of this environment, it is only natural that we feel a spirit in the wild. 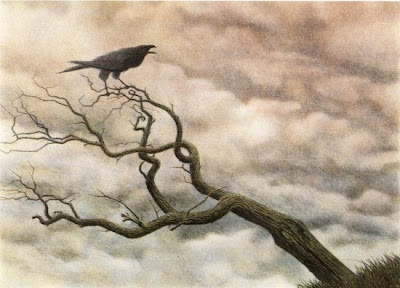 The raven was perched in a low dead tree up ahead. My dog was running here there and everywhere following the multitude of scents that were all about. The paddock was empty of sheep now, but it was not the sheep scent that Noir followed, she was trained to ignore sheep. No these were the scents of roo, fox, perhaps dog and rabbit and hare.


The raven was still in the dead tree but appeared to be alert. Noir ran in that direction but she did not look up and see the raven but the raven was watching her. The trail I followed ran through bracken but as I approached the dead tree the trail widened as the bracken fell back to expose grass. Suddenly the raven took flight, but toward me instead of away from me. I kept walking but the raven flew straight at me and then turned and dived toward me again. But this was not an attack; it was more like a warning. It continued to flap in front of me appearing to do some sort of aerobatics directly in front of me and then suddenly something caught my eye, a large snake crossing my path just a little ahead. As soon as the snake had crossed my path and disappeared into the bracken on the other side the raven broke off its gyrations and returned to the tree. My dog came bounding over obviously on the scent of the snake and I called her to heel.


As I got to the tree I stopped  and said “thank you”, and after a brief recognition that I had spoken to it, the Raven took off calling loudly. 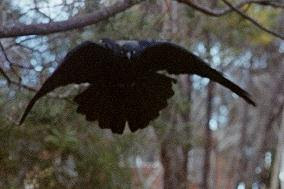 Being a Christian, I tend to shy away from anything that smacks of paganism. Still, God said that Soloman was the wisest man who ever lived or ever would (if I remember rightly). Soloman's remark about aninals was (roughly), "Who is to say that the soul of man goes up to the father at death while the soul of a beast goes down to the earth?"

I figure if the wisest man who ever lived wasn't going to write animals off as dumb, soulless brutes, then our "all-knowing scientists" should be careful saying that they aren't capable of thought or feeling. A half-century plus of being around animals has proven otherwise to me, anyway.

I believe that I once had a doe "give herself to me" as the Indians called it, because I'd fed her and her family through the tough winter before and allowed her line to continue. I politely declined and wished her well.

Yours is a good and believeable story.

Thanks for your comments Gorges. I believe all animals are the same when it comes to intellegence, some are smarter than others, i.e. you get smart dogs and dumb dogs.
I have seen some real smart animals in my time, and feelings are something they definately have.
Explain what happened with the raven and why? I can't, anymore than I can explain other interactions with other animals I have had over the years, but each encounter is an incredible experience.
Regards.

Lots of ravens around my place. We "talk" to each other all the time. :)

First thank you for this post. Being a mix breed, all living creatures have a meaning to me & my fathers family. I also am a Christian but it has not interfere in those beliefs. But I too have experienced special encounters with two & four legged creatures as well as the winged ones...but one night it happened. (It took me a very long time to find my spirit guide for when the time is right it will find you.) I had been waiting for this for many years...then my spirit guide finally came as a white owl who flew in front of me with it's wings outstreched in all its glory. It shown like a glowing light in the dark of night. It did not speak...but I felt I came to my own understanding of my heritage...a validation of who I am and of The People.
I know it is hard to explain a personal experience to others but I know. Since then I have been named and known by WhiteOwl.

A comforting story you share with us. Comforting for me, that I am not the only one with similar animal encounters (wolf/dog/dingo)...