The 18th Century Woodsman as a Survivalist.

The 18th Century Woodsman as a Survivalist. 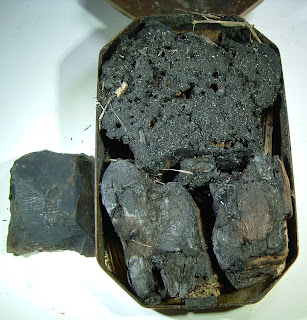 Plant tinders in the author's tinderbox.

Being an 18th century woodsman and participating in Historical Trekking means more than just posturing. Yes charred cloth was used in the 18th century as a tinder for making fire, but it was not used by woodsmen in the wilderness. Some would be woodsman choose to carry a percussion gun, but the fact is, woodsmen did not carry a percussion gun because (a) it was not invented in the 18th century, and (b) which is more important, percussion locks are not suitable for survival in the wilderness. You are better off flinching and getting used to a flinter than you are relying on percussion caps. 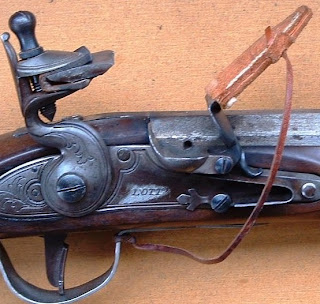 The woodsman’s hunting knife was more often than not a butcher knife. With a blade between 7 and 12 inches it was well suited to skinning, butchering and self-defence. So think about what your hunting knife is meant to be used for before purchasing. The same goes for the tomahawk. The tomahawk was the 18th century trade axe, and it was designed as a practicle tool and weapon. The round poll and the square poll tomahawks were used for shelter construction, making pegs and stakes and driving them into the ground. They could also be used in the butchering of game, for fighting, and for throwing; either for hunting or in battle. Hammer poll tomahawks will split stakes when driving into the ground, and the poll on a pipe tomahawk is only of any use for smoking. If you want to smoke a pipe, carry a pipe. 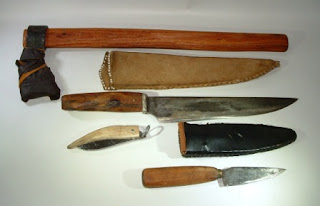 The author's blades that he always carries in the woods; tomahawk, hunting knife, friction clasp knife, and a legging knife.

Now here is a tip that I learnt from a very close personal and family friend who went under some years ago. Shane was an ex Ranger, and he suffered with painful feet when wearing moccasins. But instead of looking for alternate footwear, he compromised authenticity by adding just the foot part of a pair of modern thongs (flip flops, jangles) as an inner sole. Personally I think this is a great idea. I guess if you are like me and prefer not to compromise authenticity in this way, you could just simply add leather inner soles and see if that does the job. 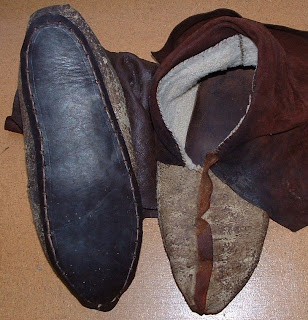 I do a lot of research, but I can’t find information on a lot of things that I would like to find. In order to determine what items might be carried by certain types of 18th century people, it is necessary to use experimental archaeology. Again we must think of the woodsman as a survivalist, but having said that, some woodsmen were smarter than others. There is no definitive answer to why some people did certain things and others did not. Family tradition would no doubt often play a part, e.g. “my Father never bothered to carry an oilcloth so I don’t either”. There are records of grose incompetence by some woodsmen that fairly boggles the brain. The only thing we can do is actually use our equipment and decide for ourselves on what we carry, how we carry it, and what period methods we use to look after our equipment and tools.
You may only be able to get into the woods for a weekend, but you must imagine that you are going to be in the woods for a lot longer. This has a very practicle point to it aside from an authenticity point of view. You can never be sure what is going to happen to you out there. You may literally find yourself in a survival situation. This has happened to me more than once, and if I had not payed attention to carrying the right gear, I may not be here right now.


Think about it.
Keith. 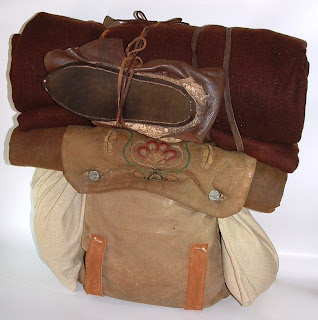 Are you saying hammer-poles split stakes worse than either round or flat poles?

Yes Gorges. The hammer part is usually too small for hammering in stakes, but okay for small cabin construction pegs. Some modern tomahawks have large hammer faces, & these would probably be okay.
Keith.

Thanks for clearing that up. Even though I have a tomahawk, I always use modern handaxes, since I don't actually re-enact.