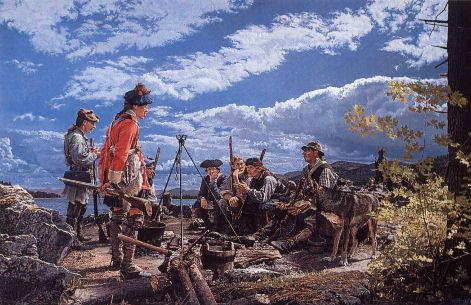 February 8. Sixth day's march — The river wound through a broken, hilly, country and the general course was not favorable according to our opinion. The weather was very cold and stormy ; the traveling, in general, very bad all day ; the men were so feeble and lame with frozen feet, that but few of them were able to break track, so that we began to be fearful that we should not be able to reach any settlement for some days, and had we not have had some relief by traveling a part of the way on the river, it is highly probable some of them would have perished. We had one — and but one— dog along with us ; he was large and very fat, and this
evening he fell a sacrifice to our necessities. Our custom on this march was to encamp ten men at a fire. The dog was carefully butchered and divided into seven parts, except the entrails which the butcher had for his
fees. These he brought to our fire, and ten of us made a very good supper of their fat, without bread or salt.

I don't imagine the very large, fat dog was very happy about the situation.

Well you know what they say Martin, "it's a dog's life", or it was!