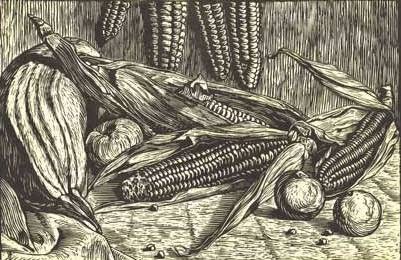 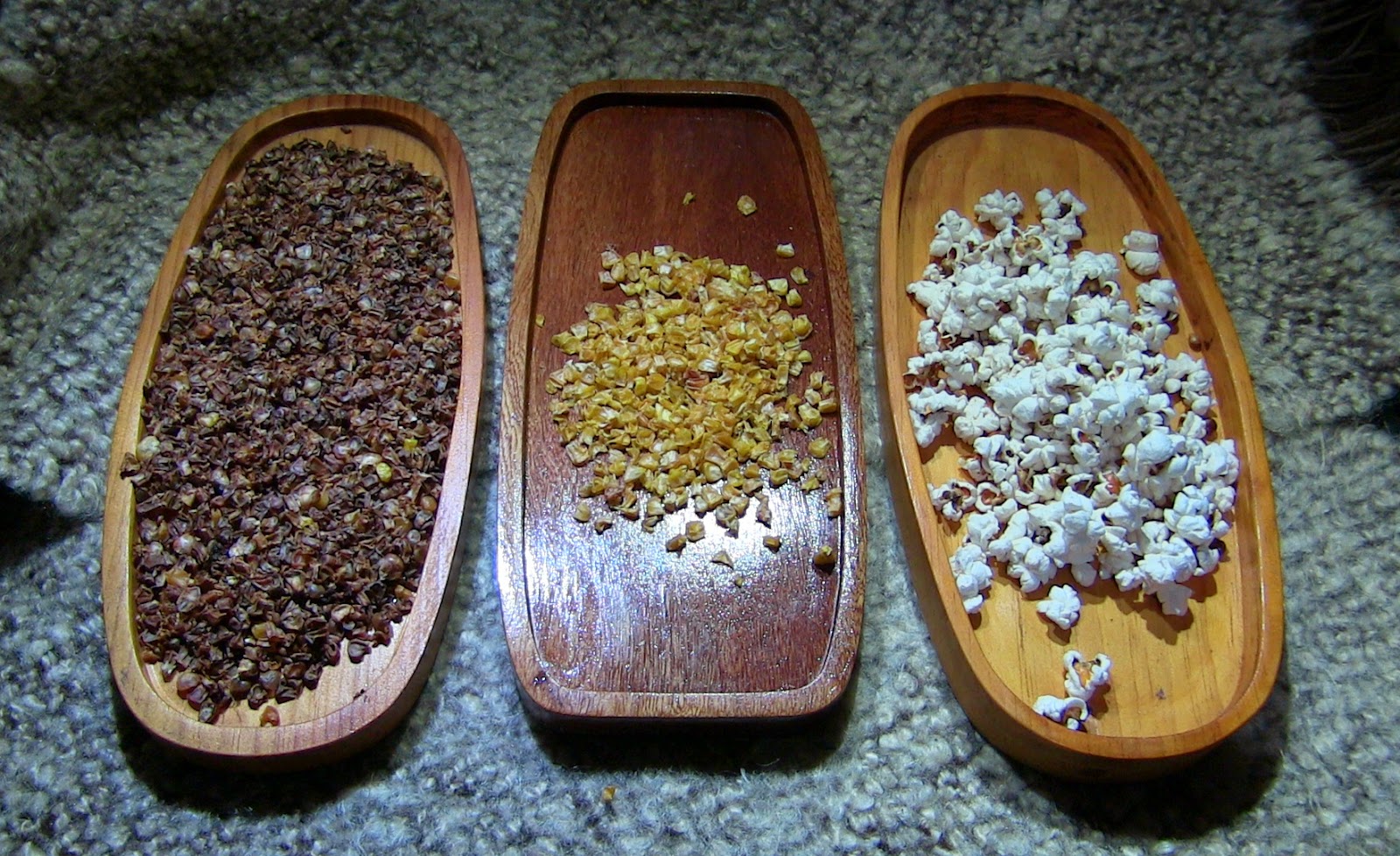 Corn can be dried on the cob by hanging it from it’s outer leafy layer & it can then be stored. Or this dried corn can be parched & stored or ground into a meal & stored.
Dried corn can be made by cutting the corn from the cob & spreading it on bark in the sun, or it can be dried on the cob by hanging in the sun. Dried corn is just that, corn which has been dried. But parched corn is a super dried corn. To parch corn you can either: remove it from the cob & spread it on flat rocks in or around the fire, or you can place it in the hot ashes until done & then sift the ashes. When pottery came into use, a clay pot would be placed in the fire at an angle & hot ashes would be piled up & placed over the pot. Shucked corn would then be placed into the pot to parch. When parched, the corn kernels would be hard & crisp.
Another way to use the clay pot was to part fill the pot with hot ashes, & then add the shucked corn. Later when iron pots & skillets were available, the shucked corn would be placed in these & shaken periodically to make sure the corn kernels did not burn. I have found no mention of oil or grease being used in the parching process.


Popped corn was made with a different corn to the normal white, yellow or sweet corns. Popped corn is a type of flint corn, & to make it you can place it on a hot flat rock in the fire, or you can place it in hot ashes. When it pops, the kernels will jump from the fire or the ashes & must be retrieved. If placed in an iron pot with a lid, it may be wise to rub a little grease round the inside of the pot, but not too much. Drying corn on the cob by tying the gathered husk & hanging.

AMERICAN INDIAN CORN DISHES By 1CPuriel H. Wright
Botah Kap.ussa (Cold Flour) : Shell corn from the cob when the grain has reached the stage where it is firm but not dry. Place the shelled corn in a large pot of hot ashes, keeping the pot over coals of fire until the corn is parched a golden brown, in the meantime stirring the grain to keep it from scorching. Put the corn into the fanner, and clean off the ashes. Next pound the corn in the mortar until the husks are loosened. Again clean out the husks from the grain in the fanner. Beat the clean corn into flour in the mortar. This parched corn flour may be sweetened with enough sugar to taste. Add enough water to dampen a small serving, and eat as a cereal. A small amount of botah kapussah will go a long way as food. In tribal times, the Indian hunter took a small bag of this unsweetened food with him on long expeditions, often traveling many days with nothing else to eat except botaic kapussuh, a little at a time generally mixed with water. This cold flour was a boon on a long hunting expedition because a small amount was nourishing, and a bag of it was light and easy to carry.
http://digital.library.okstate.edu/Chronicles/v036/v036p155.pdf
Parched Corn or Nokehick
[Parched corn was called nokehick by the Indians, but the Englishmen called it nocake.]
“Nocake, as they call it which is nothing but Indian corne parched in the hot ashes being sifted from it, it is afterward beaten to a powder, and put into a long leatherne bag, trussed at their backe like a knapsake; out of which they take thrice three spoonfulls a day, dividing it into three meales.”
Wood's New England's Prospects [1634]
“Parched meal...is a readie wholesome food which they eate with a little water, not or cold; I have travelled with neere 200 of them at once, neere 100 miles through the woods, every man carrying a little basket of this at his back, and sometimes in a hollow Leather Girdle about his middle sufficient for a man three or foure daies: With this readie provision, and their Bow and Arrowes, are they ready for War, and travell at an houres warning. With a spoonfull of this meale and a spoonefull of water from the Brooke, have I made many a good dinner and supper.”
Roger Williams A Key into the Language of America [1643]
http://www.rootsweb.ancestry.com/~mosmd/foods.htm

Agriculture of the Hidatsa Indians: An Indian Interpretation by Gilbert Livingstone Wilson, Ph.D. (1868-1930)