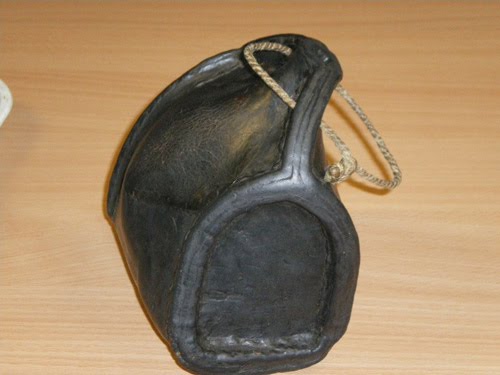 Above is an original medieval period costrel, note the short length of cordage for carrying. 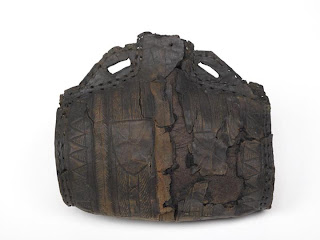 This Costrel is dated in the 14th century. 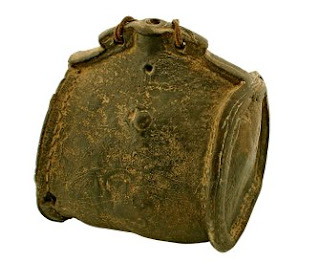 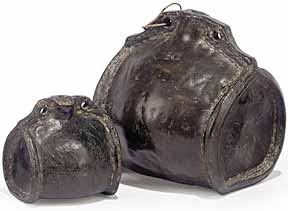 Both of these Costrels are believed to have been made in the 18th century, dated at 1730AD. 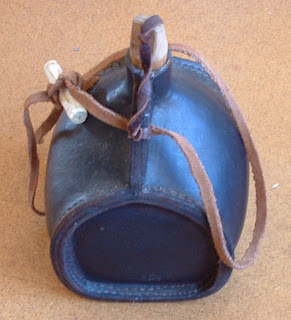 My own 18th century replica leather costrel. Note the short leather strap with a toggle on one side for securing to the waist belt.


Leather Costrels date from the medieval era and into the 18th century using roughly the same pattern right through. I have seen long straps attached to modern replicas of the Costrel but found in use that this just adds more weight to my shoulders that are already burdened carrying a shot pouch, knapsack, and haversack. Then I read somewhere that infact the leather costrel was originally carried on a waist belt by a short strap or length of cordage. I contacted the Reverend and this is what he had to say about the Costrel:

"The costrel pictured here has a short leather loop handle that I thread a waist belt through to carry it when I’m on the march. It sits very comfortably on the hip and can be quickly accessed by undoing the belt. Nothing else is on that particular belt. The original the design was copied from was allegedly worn in this manner".
http://leatherworkingreverend.wordpress.com/2009/10/18/costrels/

I already wear a waist belt which is also used to secure my hunting knife and my tomahawk and I think adding another waist belt would not be very practicle, so using the short strap I have seen on originals I devised a method using a wooden toggle which I carved from a piece of willow to secure the Costrel to my belt in such a manner as I could easily remove the costrel without taking off the belt.
Whether or not this method was ever used in the 18th century I cannot say, but it seems reasonable that a thinking person could easily have devised this method for the same reason as myself. Meanwhile I will continue to research this.

Experimentation on carrying the Costrel on the belt have so far been very favourable, and my toggle method works very well.

It was rather interesting for me to read this article. Thanks for it. I like such topics and anything that is connected to this matter. I definitely want to read a bit more on that blog soon.

I am glad to find this entry. I have been thinking about making one of those myself to carry about a 1 to 1 1/2 litre of water when out on walks and was wondering about how to carry one, as I didn't want another strap around my shoulder. How big is this one? And if it's about the size I am looking for, would you mind giving me your dimensions?

All the best
Joel

Hi Joel, good to hear from you.
My costrel does indeed hold 1 1/2 litres. You can get smaller versions but I think this size is just right.
Difficult to explain size because it is not just round or square. I will give you the dimensions of the ends, and the OVERALL size is the actual shape. Does that make sense?
5 1/4" wide 6" overall
5" high 7 1/4" overall (to top of neck).
6" long.
Regards, Keith.

Thanks for the prompt response Keith.
Make sense? I am not sure! Is the 6" measurement the outside width of the end and 5 1/4" the inside of the ends??

The ends seem to be sort of triangular shaped with one straight side (the bottom) and two curved sides....so... the overall width of the rounded sides of the triangle is 6" and the height of the end is ??

Eeeep... I see what you mean, not easy to describe!!

How thick would you say the leather is?

I will be putting some more pictures of the leather tankard at the week end.
All the best
Joel

All measurements are outside measurement, but see how the sides of the costrel bulge. From one outer bulge side to the other is the OVERALL measurement. The height is also taken at the ends of the costrel, but the OVERALL height is from the bottom to the top of the spout (not including wood plug).
The thickness of the leather is 3/16" (three sixteenths of an inch).

Keith, that's nice work with the toggle. I can see how that would work.

Reverend I appreciate your comment very much. It is always a pleasure to get feedback from anyone, but especially from someone such as yourself. Much appreciated.
Le Loup.

I found your website to be very useful in learning more about costrels. I found one today at a yard sale and had no idea what it was other than some weird canteen. Mine is keg shaped with wood plug, 8 inches long, eel-made, and is die-stamped on the bottom: JR B8 FEB.84. I assume this is a modern reproduction dating to 1984? Or is it possibly 1884?

Hello Michael. I think it is more likely that you have a modern reproduction. They were still making these in the 18th century, but not as far as I know in the 19th century. Good find just the same, well done.
Regards, Keith.